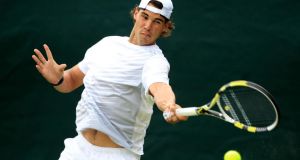 Andy Murray was confirmed as the second seed for the Wimbledon men’s singles today and French Open champion Rafael Nadal is a potential quarter-final opponent.

World number two Murray was not expected to be shunted either way in the seedings but Nadal’s case was less clear-cut, with John McEnroe among those who claimed he should be moved up from fifth in the rankings to fourth for the grass-court grand slam.

Wimbledon announced, however, that two-time former champion Nadal would be the fifth seed behind his Spanish compatriot David Ferrer, who has inched ahead of him on the ATP rankings.

That step means Nadal could face another big name in the last eight, with Murray, top seed Novak Djokovic and defending champion Roger Federer sure to be keen to avoid the Spaniard in their quarter when the draw is made on Friday.

Defending champion Serena Williams is the women’s top seed, ahead of Victoria Azarenka, Maria Sharapova and Agnieszka Radwanska, who make up the top four.

The Wimbledon referee’s office, announcing the seedings, explained that the men’s list was defined by a specific formula.

It allows for no deviation based on historic Wimbledon performances before 2011, so Nadal’s wins in 2008 and 2010 had no influence on his placing this time.

The top 32 players in the ATP rankings start as seeds, with their current totals supplemented by points gained on grass in the past two years.

Nadal’s second-round exit to Czech surprise package Lukas Rosol at Wimbledon last year has therefore proven costly, as has the seven months he spent out of the game after that loss, receiving treatment for a knee injury.

The Wimbledon seedings committee has the authority to make changes to the women’s rankings in the seedings but elected not to do so this year, meaning the world’s top 32 line up remains in order.