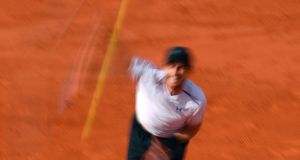 Andy Murray is in the semi-finals of the French Open for the fourth year in a row, exploding the myth, surely, that clay is his weakest surface.

He is now consistent on all surfaces – certainly in big tournaments – and has a fighting chance of finally adding the title to those he has won at Flushing Meadows and Wimbledon.

However, the world No1 – who arrived in Paris in ordinary form and unable to train properly because of a lingering cold – was briefly in danger of following the defending champion, Novak Djokovic, out of the tournament before beating Kei Nishikori in a four-setter that he began poorly and finished in style on Court Philippe Chatrier in a warm, still Wednesday afternoon.

Murray said courtside: “I needed to put a little bit more pace on my shots. He was dictating all the points in the first set. Once I got a better rhythm, I was able to keep him away from the baseline and that made a big difference. Stan has played fantastic this tournament. I don’t think he’s dropped a set. I had to play one of my best matches on clay to beat him last year.”

Nishikori broke twice in the first half hour, serving out the set without bother, and Murray needed to regroup quickly in perfect conditions once the wind dropped.

At the US Open last year, it was Nishikori who came from 1-2 down to beat Murray in the quarter-finals but, after his uneven win over Fernando Verdasco in the third round, it was still a surprise to see him start so fast here.

The match, predictably, was not without incident. The chair umpire, Carlos Ramos, gave Murray a time violation in the first set and he dropped serve, descending thereafter into a rolling rant that lasted all the way to the fourth set.

At deuce and one-all on Murray’s serve in the second, Ramos interrupted him during his ball toss for a second time violation, penalising him the point, but this time the Scot was motivated to hold – not before letting the umpire know what he thought: “I’ve been on Tour so long and I’ve never seen that. Why did you do it when I was throwing the ball up?” The umpire replied, “Every single point, you are over the time.”

It was the spark that Murray needed – and Nishikori suffered. He handed him two break points with a dreadful smash and Murray was up 3-1. Within minutes, he had to save two break points – the second given up with his fourth double fault – to hold and went on to level at a set apiece.

Murray was coasting, a break up in the third, when he dropped serve and Nishikori held to love. They worked their way to the tie-break – probably one of the worst shootouts either of them has played.

They swapped breaks again at the start of the fourth, and a worryingly familiar pattern reinstated itself. Coming into this tournament, Murray has handed back the break to his opponents 18 out of 80 times this year. Last year, he held on to his break 255 of 302 times (84 per cent), similar to his strike rate in 2015.

That Murray managed to forge on to the finish line without blemish probably surprised him as much as everyone else.

Earlier, the erratic and tempestuous world No4, Simona Halep, who wondered before the tournament if she would even play because of a twisted ankle, beat the fifth seed Elina Svitolina, 3-6, 7-6 (6), 6-0, having come back from a set and 5-1 down.

In the semi-finals, she plays the second seed Karolina Pliskova, who beat the home favourite, Caroline Garcia, 7-6 (7-3), 6-4. Pliskova will become the first player from the Czech Republic to be ranked No1 in the world if she reaches the final.