Belfast bantamweight will fight at 6pm Irish time in Doha

Michael Conlan is set to fight for a World Gold medal in the bantamweight division at the World Amateur Boxing Championships in Doha, Qatar. Video: Darragh Bambrick 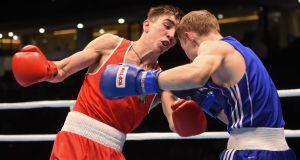 Back in April, Michael Conlan was on the verge of stepping out of a Venezuelan hotel and on to a flight towards professional boxing. Tonight, the 23-year-old Belfast bantamweight attempts to become the first Irishman to claim World Championship gold.

Instead of turning pro, Conlan went on to claim European Championship gold last August and he now has the chance to add a world title to his illustrious CV this evening, taking on Murodjon Akhmadaliev of Uzbekistan in the 56kg final in Doha.

On the evening of April 17th last, the chances of Conlan contesting the world final were slim, however. In Maiquetía, Venezuela, for a bout in the World Series of Boxing (WSB) the next day, Conlan was potentially one win away from sealing his place at the Rio 2016 Olympics the following evening. After travelling over 34,000 miles to fight in seven previous WSB bouts in four months in pursuit of Olympic qualification – along with team-mate Paddy Barnes – Conlan had to win and rely on an unlikely result elsewhere.

He was so upset by his predicament, the Falls Road fighter was on the verge of quitting amateur boxing, but his own victory and a shock result elsewhere sealed his place at Rio 2016, convincing him to stay in the Irish fold and pursue an unprecedented haul of Olympic, European, Commonwealth and now World medals.

His decision to stay and fight was an example of the growing sense of maturity both inside and outside the ring, which led Irish head coach Billy Walsh to make him captain of Team Ireland at the World Championships.

Those traits have been evident in Doha over the past week as Conlan has breezed to the final, claiming a series of comfortable unanimous-decision wins .

“In previous fights, Zaur [Antia, coach] would even tell me he thought I was crazy because I’d go to war,” said Conlan when questioned on the discipline he as shown in his in-ring performances.

His more mature approach to boxing and life in general is something he puts down to the birth of his daughter, Luisne, with fiancee Shauna.

“Since I’ve had her [his daughter] I’ve matured definitely, because before I would have lost the head during fights, but now I’ve got to do what’s best for me and my career and support her.”

After shaking a bit of ring rust in his first fight here, the Irish captain has demonstrated versatile and slick movement that would make a Cuban perfectionist cheer, using fluid footwork and fast hands to reach the final.

Waiting for him is Akhmadaliev, world number 22 and Asian Games silver medallist.

Conlan is a fancied to become Ireland’s first male world champion, although his Uzbek opponent eliminated number one seed Kairat Yeraliyev of Kazakhstan in his first fight.

“I haven’t looked at any opponents but I’ve seen bits of this kid because he’s been fighting before me [at the tournament],” said Conlan. “I’m just going to have to go in there and do what I do and perform and if I perform the gold medal will be in my hand.”

Meanwhile, Michael O’Reilly can be certain of Olympic qualification should he win a third-place middleweight (75kg) box-off against Hasan Abdin of Egypt tonight.