OCI also reprimanded ‘for not having properly informed its athletes’ 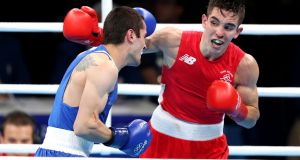 Michael Conlan in action against Aram Avagyan during the Olumpic Games in Rio. Photograph: Dan Sheridan/Inpho

Irish boxers Michael Conlan and Steven Donnelly have both been sanctioned with “a severe reprimand” by the IOC for placing bets on fights at the Rio Olympic Games.

Donnelly was found to to have placed two bets on his last 16 opponent Tuvshinbat Byamba to beat him. Donnelly would ultimately win the welterweight contest after coming from behind after losing the first round.

The Belfast fighter claimed that he “had bet without intending to cheat by losing his match to win his bets, rather, winning the bets would be some compensation in the event he lost his match”.

Donnelly was beaten by Morocco’s Mohammed Rabii in the quarter-finals in Rio. The IOC found that the boxer did not bet on that bout.

IOC documents also reveal that Conlan placed bets on fights on August 8th and 9th – with at least two of those being in his own weight class. The recently turned professional did not bet on his own bouts.

Conlan’s betting was discovered by the IOC while in Rio and his account was suspended. The IOC statement points out that “the bets placed were of a relatively low amount of money (maximum of GBP 200), yet they had created opportunities to make large amounts of money if they had been successful. All the bets had been lost”.

The Belfast fighter admitted to the offences at a hearing in Brazil on August 20th that was also attended by his father John, who is his trainer, boxing team leader Joe Hennigan and Olympic Council of Ireland (OCI) officials Kevin Kilty and Stephen Martin.

Conlon said he had signed documents regarding a ban on Olympic betting “without reading them”. And that betting was a hobby of his, and one he turned to due to the boredom of residing in the Olympic Village. Donnelly made similar statements at his hearing on August 15th.

The duo will have to successfully follow an educational programme of the IOC in order to have their accreditation validated for the next edition of the Olympic Games in Tokyo in 2020.

Conlon, however, has already turned professional, signing a contract with Bob Arum’s Top Rank – the promotion company who once represented Muhammad Ali and now promote Manny Pacquiao. Donnelly is also expected to follow him into the pro ranks.

The OCI are also “requested to make sure that the team preparation for the Olympic Games (winter and summer) includes complete education on the prevention of the manipulation of competitions and betting on the Olympic Games, using the material provided to the NOCs by the IOC.”