If Jordan Spieth was on board Rule the World, he’d still be lining up that first Aintree fence 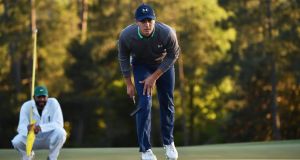 Easy does it: US golfer Jordan Spieth lines up a putt on the 18th green in Augusta. Photograph: Nicholas Kamm/AFP/Getty Images

Come midnight Hazel Irvine had to apologise to those tuning in for the movie on BBC2: things were a little slow at Augusta so it would be delayed.

By ‘things’, of course, she meant Jordan Spieth, but she was much too polite to say.

The movie was The Mummy in which a decidedly cranky mummified high priest was brought back to life by hapless archaeologists. With Peter Alliss on duty at Augusta, Hazel was possibly fearful that he’d declare it to be much less of a horror show than Jordan’s dawdling.

“What time does it get dark?” he asked Andrew Cotter as Jordan lined up his putt in that, well, unhurried way of his.

Andrew didn’t answer, but it didn’t stop Peter from emoting. “It’s now over four and a half hours since these boys struck off . . . we keep on saying it, but there we are.” Done? No. “Absolutely ludicrous.”

It’s as well he wasn’t on duty on Thursday because, by all accounts, Jordan took 17 practice swings before a shot to the 10th, no doubt after a half-hour chat with his caddy and an in-depth read of his yardage book. Not since the heady days of Terry Griffiths have we waited so long to see a man strike a little white ball.

The aficionados would, of course, say “hush now, ye fly-by-nights – he’s brilliant, and that’s all that matters”, and they’d be right. But still, you need quite a bit of patience watching the fella. Much like patience a certain Offaly golfer displayed when ESPN’s Tom Rinaldi introduced him to his viewers last week before their post-first-round chat as “Shane McLowry”.

The week’s worst moment(s), though, was poor Ernie Els’ first hole horrors. Not since David Coulthard’s utterance during the Australian Grand Prix (“I suspect there are a lot of hardcore Ferrari fans out there who would willingly pay £800 for one of Vettel’s Nuts”) were viewers rendered so speechless.

Also almost lost for words on Saturday was Michael O’Leary – “and it’s very rare in my life I’m speechless”, he didn’t lie – after Rule the World won the Grand National, trainer Mouse Morris also attempting to speak to Clare Balding after another emotional day, but breathlessly conceding that “I’d better give up the fags”.

Nina Carberry suffered a similar fate with Sir Des Champs, catapulted heavenwards, Alice Plunkett catching up with her soon after she landed back on earth. Not a bother, of course, and she hadn’t much time to chat, she was riding in the next race.

(Note to Channel 4: Nina wouldn’t have been the first woman to win the National: 13 did it before, the last in 1951 – Nickel Coin. Four legs doesn’t mean yer not a lady).

So, hardy folk, but none hardier than the horses who, mercifully, all came home alive despite the carnage potential and having the bejaysus whipped out of them. When we tell our great grandchildren about the days the Grand National and UFC were legal, they’ll be like, ‘WTF – are ya serious?’

Sunday evening, back to the Masters. You couldn’t help but think, if Jordan was on board Rule the World, he’d still be lining up that first Aintree fence and checking his yardage book. At which point the horse would ask, ‘what time does it get dark?’

1 Andy Farrell ticking all the boxes in advance of England showdown
2 Ireland wary of Peyper calling the tune as they head for Twickenham
3 Owen Doyle: Day of the jackal may be coming to an end
4 Players impressed with Bono’s Irish pride and desire
5 Sonia O’Sullivan: Four into one won’t go as Irish sailors vie for Tokyo place
Real news has value SUBSCRIBE