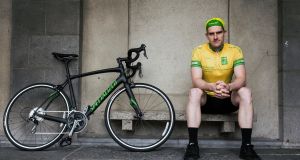 Martyn Irvine pictured at the launch of the 2016 An Post Rás at Dublin Castle. Photograph: Billy Stickland/Inpho

Ireland’s only track world champion in the past 100 years, Martyn Irvine, has said that he is considering a return to the sport he retired from earlier this year.

The Olympian won gold and silver medals in the 2013 world championships and set his sights on taking a medal in Rio 2016. However a spate of injuries and some bad luck derailed his campaign and he missed out on qualification.

Disillusioned and short on money, he announced his retirement in January. At the time he told the Irish Times that trying to come back from repeated injuries – and thus being below his usual form – had taken its toll.

“I hated being a donkey last year,” he said then. “I didn’t lose the love, but feel that something is gone in my head and I am just not enjoying it.

“I just hate to turn up every race and not perform as I should. I’ve had my run, I reckon.”

Four months on, a week spent at the An Post Rás has changed things. He drove the press car at the race, spent time with the riders and saw the sport from a fresh perspective.

“Honestly, with the track and the road and juggling everything, I just maybe lost the reason why I was doing it and I started hating it,” he said. “But this week has actually shown me that it is actually really good. Bike racing is fun.

“It has definitely given me a buzz to maybe not so much go back track racing but come back road racing and enjoy it again.”

Irvine was speaking on Sunday, the fifth anniversary of his Rás stage win into Kildare. On that day in 2011 he dedicated that win to his late friend, Irish international Paul Healion, who had died in a car accident two years before.

On Sunday he was back in the same town for the start of the last day of this year’s race.

It brought back emotions and reminded him of his earlier love for the sport.

“I have just soaked in these last few months that I love travelling, I love bike racing,” he says. “I wouldn’t say no if something came out of the woodwork. Not high stress, but I would definitely do it more than amateur. But I don’t know what level.”

Irvine was one of the strongest riders in last year’s An Post Rás. He was fourth on two stages and seventh overall, but had the form to do more than that. However he missed a couple of important breaks and found that his reputation and past achievements led to some very close marking.

His frustration exiting the race mirrored his feelings on the track, where a spate of injuries meant he was swimming against the current to qualify for Rio.

“I was stuck in a rut, chasing goals and I was getting roadblocks everywhere,” he says, reflecting on that time. “I suppose you just get the life battered out of you. I think that is what happened.

“I love road racing and I kind of lost the love of that because I had to chase the track. Maybe this year [returning to the sport domestically] will be good for me.

“I am not young, but I am not old either. When I was racing I felt like the old guy with all these teenagers coming in. But now there are guys racing mid-30s easy, late 30s if they are mad, and I suppose it is not undoable to come back at 31 and to have a few more years in me if the chance comes around.”

So what now? Irvine said that he hasn’t trained since announcing his retirement, but was looking forward to getting back out on his bike again and rebuilding his fitness. He’s not planning on doing things full time and will continue to work.

But if the bug bites, the form comes and he gets an interesting offer, there is a chance his time away from the sport will be a hiatus in his pro career rather than an ending. Time will tell.

So what about the track, the area where he had his greatest success? He has a love/hate relationship with the velodrome, but describes one circumstance that might grab his interest again.

“I suppose disciplines that suited me,” he states. “I was kind of forced into the omnium [by the dropping of other Olympic events]. I hated the omnium as I am not a fast guy, I am a strong guy. If endurance events come back, pursuit or scratch, I would focus for that. Honestly I would.

“If pursuit or scratch came back at the Olympic level, I would be the first to put my hand up for it.”

Those were the races where he took worlds silver and gold three years ago, and clearly suit him. The UCI is considering revising the Olympic track programme and it’s possible they could reappear. But that’s down the line: right now, his only thoughts are about getting back on his bike and rediscovering his affection for the sport he thought he’d left behind.

1 Return of Conor Murray’s box kicking could exploit French vulnerability
2 Jim McGuinness: GAA offers a great distraction after return from the US
3 Here is your handy guide to sport on television this week
4 Sam Bennett struggles as Roglic wins Stage 10 of Vuelta
5 History suggests England should keep their part of the bargain
Real news has value SUBSCRIBE