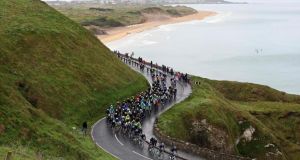 The peloton makes its way along the causeway coast on the north Antrim coast on the second stage of the Giro d’Italia cycling race. Photograph: Cathal McNaughton/Reuters

Marcel Kittel comfortably won stage two of the Giro d’Italia in Belfast as his Giant-Shimano team controlled the sprint finish.

The German, the best of the sprinters in this year’s Giro field, kicked for the line with 50 metres to go and eased away to finish ahead of FDJ’s Nacer Bouhanni, with Trek Factory’s Giacomo Nizzoli and Cannondale’s Elia Viviani close behind.

It was another demonstration of class from Kittel, winner of four stages on the Tour de France last year, who will be hoping to celebrate his 26th birthday on Sunday with another victory on the streets of Dublin.

For now, though, he has already reached one major milestone by adding a Giro stage victory to those he has claimed on the Tour and the Vuelta a Espana.

“I’m really proud that I could win a stage here,” Kittel said. “It’s a big relief because to win (in all three Grand Tours) is a big goal to have as a cyclist. What makes me especially proud is there are some riders here in the team who have won in every Grand Tour with me so that’s special for us.”

All the riders made it safely through the tight final bend on a greasy surface as the entire field survived what had been a testing day in often soaking conditions, a day after Dan Martin’s hopes were ended in an opening-stage crash.

The 219km stage had taken the riders north out of Belfast, through Antrim and Ballymena, up to Giants Causeway and back along the picturesque coastal road, where thousands of fans lined the roads in spite of the conditions.

Asked what memories he would take away from Northern Ireland, Kittel said: “The first thing that comes to mind is the rain. And the second thing is the amazing atmosphere.

“Even with all the rain there were so many people outside today, only in shorts and t-shirts – I don’t know how they do it. They were really cheering very hard for us and it made us feel very comfortable.”

As the peloton left the city to head north, the rain was pouring, with the weather threatening to take centre stage again, but, while there were one or two tumbles, there were no major incidents.

Tjallingi led the break over the two climbs to claim the first climber’s blue jersey of the Giro, while Fedi claimed the intermediate sprint.

Orica GreenEdge, defending their pink jersey, took the lead in closing the gap, with Tjallingi the last to be caught 3km from the line.

Cannondale and Trek Factory both took turns on the front, but Giant-Shimano were always well placed behind and made their move inside the final kilometre.

The 23-year-old Matthews likes to play up his ‘Bling’ brand, and can now do so in pink after leading Orica home just behind the leaders.

“For me, in my first Giro, to wear the pink jersey is truly incredible, a dream come true, that’s all I can say,” he said.

While Matthews can don pink for now, those who hope to be wearing it when the Giro ends in Trieste in three weeks time could be grateful for a drama-free day with all the main contenders making it round without losing any time.