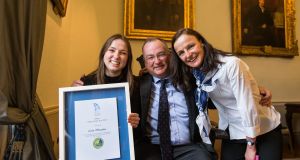 Corinthian values and amateur sport were credited by Liam Shanahan as he won the overall Afloat Sailor of the Year accolade at the annual Irish Sailing Association Awards.

The skipper of J109 Ruth won the June 2015 Sailor of the Month for winning the biennial Dún Laoghaire to Dingle Race – the D2D –that saw a 50-mile duel between the National Yacht Club crew and Welsh sistership Mojito in the closing-stages of the 320-mile offshore race.

Shanahan went on to retain the overall ISORA (Irish Sea Offshore Racing Association) title for 2015 at the end of the main season.

“There are far better sailors out there than me and our crew on Ruth but this award recognises Corinthian and amateur sailing,” Shanahan said at the awards ceremony hosted by the Royal College of Surgeons in Dublin.

The short-list of nominations for the annual title reads like a who’s who of Irish sailing and even then many well-known sailors are absent, for this year only perhaps.

Sisk missed out on this particular overall prize though his performance was one of several reasons that his club, the Royal Irish YC in Dún Laoghaire received the long-standing Mitsubishi Motors Club of the Year award for 2015.

Club-member Tim Goodbody received the November award for his contribution to sailing while the RIYC was also short-listed for the ISA Training Centre of the Year Award that was won by Mullingar Sailing Club.

Jim Slattery, father of crew-member Justin Slattery was on hand to receive his award that recognised the Abu Dhabi Ocean Racing team’s overall victory in the Volvo Ocean Race in June under skipper Ian Walker.

This was Slattery’s second time winning the round the world race. His first was in 2006 on ABN AMRO with crewmate Sidney Gavignet, who turned out to be the May award recipient, this time for setting a new Round Ireland record time on his trimaran Oman Musandam.

Cruiser Racing and Offshore sailing featured prominently throughout the awards that included Rónán Ó Siochrú who won the prize for the best sailing school entry in the 605-mile Rolex Fastnet Race.

Colin O’Sullivan and Douglas Elmes from Howth Yacht Club emerged overall winner of the Youth Sailor of the Year awards for their bronze medal result at the ISAF World Championships in Malaysia that overlapped in to the start of 2016.

Also present to receive his December award was Kinsale’s John Twomey who secured qualification for Ireland in this year’s Paralympics in Rio de Janeiro. Now ranked fifth in the world, the Sonar class skipper is on track to make his 11th appearance at the games.