Letter from Rio: No ordinary Friday night as locals wait for the Games to begin

Is it not a bit much to ask Rio’s citizens to get up for Olympics in a year of domestic strife? 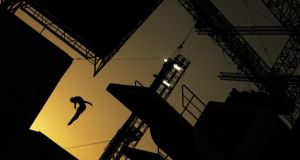 Divers in action during training at the Maria Lenk Aquatics Centre in Rio. Photograph: Getty

Rio, what have you done to deserve this?

It is Friday afternoon right now, a 30-degree and cloudless winter’s day and out at the Maracana stadium, Fernando Meirelles is presumably making frantic last-minute changes to what will become the most-watched live musical performance on planet Earth.

As 2016 spins on in what seems like a perpetual state of global unease, all the usual questions about the wisdom of the Olympics have been aired. Is it wise that a country should spend $11 billion to host a two-week extravaganza of athletic supremacy which can be reduced to an ongoing arm-wrestle for gold medals between China and the USA?

Is it not a bit of a sick joke to expect Rio’s citizens to be up for these Games in a year when their police force are paid irregularly, when unemployment is soaring and prospects are tanking? Isn’t it indisputably disgusting that IOC president Thomas Bach can talk dreamily about housing the All-Refugee Olympic team even though thousands of locals have been “displaced” – kicked out of their homes – through the Olympics project in Rio?

The scale and ambition and heartlessness of making any host city ready for Olympics leaves the very idea of the Games open to question. For months now, the international reports on Rio’s capacity to host these Olympics have been universally damning, from waters livid with pollutants to spiralling crime levels to substandard building work to extortionate prices.

Over the past few days, athletes from all over the world have been Instagramming and Tweeting their little hearts out about their first impressions of their living quarters in Rio. It doesn’t take very long to form the impression that the entire Olympics facade was assembled by O’Reilly, the builder favoured by Basil Fawlty for his cut-price rates. And it’s true that the accommodation has a kind of flat-packed aura about it.

Where The Irish Times is sequestered, for instance, in a media village not far from the border with Uruguay, in 1970s-style Benidorm villas constructed off a motorway, the TVs wouldn’t go and the air-conditioning wouldn’t go off and when you unplug your charger, chances are the socket would come away with chunks of fresh plaster. But then, there is nothing much on the television anyhow, the a/c is a luxury not afforded to all official Olympics accommodation and there are plenty of spare sockets about the place.

And here is the thing: the staff working here have been hell-bent on ironing out every quibble and shortcoming they are presented with. And they are all volunteers. This, in short, is the diabolical ingenuity of the IOC methodology. While the top-tier of Olympicana revolves around its much-maligned committee, swish hotels and shaded windows and cash reserves of close on $900 million and the billions earned on television rights, the actual Olympic representatives on the ground are the volunteers from the host city and around the world who are devoting their time and energy and goodwill because they choose to believe that the Olympic Games as a concept is wonderful rather than preposterous.

They are mostly young and lack nothing but cynicism. So as long as the IOC can depend on that reserve of goodwill, they can bank on the thousands of visitors and competitors and officials coming to believe that the Olympics, for all its imperfections, is still suffused with a kind of magic.

But London was a triumph of spirit and organisation and, for a few weeks, the city stepped outside itself and allowed itself to be charmed. Rio faces greater challenges. If tickets were impossible to come by four years ago, there are plans to hand out almost quarter of a million tickets to under-privileged youngsters to try and fill seats at less popular events like rugby sevens and golf. What kids from Rio’s teeming interior are supposed to make of Bubba Watson teeing off at the first is anyone’s guess. But if they are bored by the sport, they can always explore the wildlife: if Augusta features the occasional turtle as scenic backdrop, then Rio’s Olympic golf course is prone to occasional invasions from boa constrictors, small crocodiles and capybaras, which hold the dubious distinction of being the world’s largest rodents.

At the very least, they provide an extra incentive for the golfers to stay out of the rough. There have, of course, been no reports of free ticketing for events that youngsters would carry with them forever: a chance to see Usain Bolt or Kevin Durant in the flesh. And if it’s true, as a recent survey indicated, that just 16 per cent of locals are enthusiastic about the Olympics, then the Games could go flat. Crowds and noise make the Games and empty seats are regarded as an indictment of the host city.

This is where Meirelles and the opening ceremony will come in. For all the daft pageantry and overblown symbolism of Olympic ceremonies, the world still watches. After five o’clock now and it is already dark and even the most indifferent of the carioca cannot escape the fact that this is no ordinary Friday night in August.

On one level, the Olympics are obscene in scale and vanity and commercial intent. The Games are haunted by the spectre of drug cheats. And it is hard to argue with the growing suspicion that the Olympics is a beast which takes much more than it ever cares to give to its host city. But Rio has worked and suffered and waited for seven years under the watchful gaze of its indomitable figurehead on the Corcovado mountain. After everything, the city of God could use a carefree fortnight.