The John Gosden-trained thoroughbred is set to claim the Tattersalls Irish 2,000 Guineas 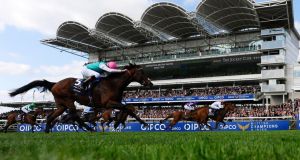 It is 21 years since a Newmarket Guineas runner-up, Barathea, went one better in the Tattersalls Irish 2,000 Guineas but Kingman is a hot favourite to pull off the same feat in the first home classic of 2014 at the Curragh on Saturday.

The picture ahead of a triple-Group One weekend at Irish racing’s HQ will look a lot clearer after today’s forfeit stage at which Richard Hannon’s Shifting Power is likely to be supplemented into the 2,000 Guineas.

With Rizeena in line to be added to Sunday’s 1,000 Guineas field, and the German Group One-winner Neatico a possible opponent for Magician and Trading Leather in the Tattersalls Gold Cup, the scene could be set for a bumper Curragh weekend, although likely ground conditions for the first top-flight weekend of the Irish flat campaign are uncertain.

Heavy rain had turned ground conditions “yielding to soft” yesterday, with a mixed forecast for the week ahead.

It is a different outlook to the one that preoccupied John Gosden and the Juddmonte team before the Newmarket Guineas this month when the prospect of fast going briefly threatened to rule out Kingman. Ultimately the colt was given the green light and ran a fine race to finish runner-up to Night Of Thunder with Australia in third after a race Gosden described as “unsatisfactory” due to the field splitting into two groups.

Bookmakers appear to believe classic compensation awaits at the Curragh, with the RaceBets firm hardening Kingman into 8-11 yesterday.

However, some star names over the years have failed to step up in Ireland. Giants Causeway was runner-up to Kings Best at Newmarket and then found Bachir too good at the Curragh in 2000. Grand Lodge could manage only fourth at the Curragh 20 years ago, while the horse that got closest to Frankel at Newmarket three years ago, Dubawi Gold, was subsequently turned over by Roderic O’Connor.

Curragh equivalent
Barathea in 1993 was runner-up to Zafonic in the English Guineas and then scored in the Curragh equivalent, something also achieved by Grundy in 1975. If Kingman does score on Saturday it will be a first Irish Guineas for Gosden and the Juddmonte team.

The in-form Richard Hannon indicated last week that Shifting Power, fourth at Newmarket when a 50-1 outsider, will be supplemented into the 2,000 Guineas, and the colt is challenging Aidan O’Brien’s War Command, ninth to Night Of Thunder, for second-favouritism in the betting, with RaceBets going 7-2 the pair.

The O’Brien camp has already indicated it is organising a four-strong team for the 2,000 Guineas. As well as War Command, Ballydoyle is likely to be represented by Michaelmas, Great White Eagle and Fountain Of Youth.

Dermot Weld scored in 1986 with Flash Of Steel, and the in-form local trainer appears likely to rely on the Amethyst Stakes winner Mustajeeb, who is currently a 9-1 shot.