Kevin Seaward, Dublin’s Mick Clohisey and Paul Pollock will make up the team for Rio 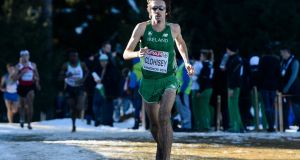 Mick Clohisey, along with Kevin Seaward and Paul Pollock, make up the Ireland team for the Olympic marathon in Rio this summer. Photo: Inpho

As unimaginably joyous as it must be to be told you’re going to the Olympics, imagine being told the opposite, which has just happened to Sergiu Ciobanu and Gladys Ganiel, the two Irish athletes who came so near and yet so far from selection for the marathon in Rio in August.

After a 17-month qualification period, the Athletics Ireland deadline for selection came on Monday, and after what must have been a difficult call, the three men selected are Belfast’s Kevin Seaward, Dublin’s Mick Clohisey and Paul Pollock, from Down, even though Ciobanu had actually run the third fastest qualifying time. It wasn’t quite the toss of a coin, although the choice between Pollock and Ciobanu could well have gone either way.

It was always going to be somewhat contentious, and while Ciobanu and Ganiel may get some consolation in being named first reserve (should any of the three selected ahead of them be forced out through injury), they also have 24 hours to appeal – with Ciobanu already indicating he will do exactly that.

However, given that selection was ultimately at the discretion of the five–person Athletics Ireland selection panel, it’s difficult to imagine how any such appeal would be successful.

“It’s never easy to tell some of the athletes that they aren’t selected and I understand their disappointment,” said Athletics Ireland high performance director Kevin Ankrom. “But I’m happy with the teams that we have selected, and I believe the athletes chosen will be prepared to produce a performance to match their capabilities.”

The three Irish women confirmed for Rio are Lizzie Lee, Fionnuala McCormack and Breege Connolly. They have run the three fastest qualifying times, although Ganiel had been making a strong push for selection in more recent months, while Connolly’s marathon qualifying time is now more than a year old.

All three Irish men selected will make their Olympic debut in Rio: Seaward was always the fastest qualifier with his 2:14:52 from Berlin last September, followed by Clohisey (who ran 2:15:10 in Seville in February), then Ciobanu, his 2:15:14 also run in Berlin, actually 24 seconds faster than the 2:15:38 that Pollock also run in Berlin.

However, according to the Athletics Ireland criteria, selection wasn’t limited to marathon times only – and indeed performance record is what ultimately swing the third place in Pollock’s favour: he finished 14th in the World Half Marathon Championships in Cardiff in March, two minutes and 37 seconds ahead of Seaward, and three minutes and 44 seconds ahead of Ciobanu. He was also 21st in the World Championship marathon in Moscow.

Still, it’s hard luck on Ciobanu, who had done everything possible to make his case for selection. Originally from Moldova, Ciobanu came to Ireland 10 years ago, working his way up through a variety of jobs, and also the Irish distance running scene. In 2009, in the colours of Clonliffe Harriers, he was the first Irish finisher in the Dublin marathon, repeated that feat in 2014. Now married to a Kildare women, his transfer of allegiance from Moldova to Ireland was completed last July.

Pollock was due to run last month’s London Marathon, only for a foot injury to force his withdrawal. He probably could have run, although with that most likely damaged his chances of recovering in time for Rio – and again Athletics Ireland, it seemed, were content to stand by his performance record.

Of the three Irish women selected, Lee and Connolly will make their Olympic debuts, while for McCormack (nee Britton) it’s her third Games, having run in both Beijing 2008 (3,000m steeplechase) and London 2012 (10,000m).

Lee, the popular Cork athlete who has just turned 36  was the fastest qualifier with her 2:32:51, from Berlin last September, followed by McCormack from Wicklow, who ran 2:33:15 in Chicago a month later. Connolly, 38, originally from Leitrim and now living in Belfast, ran the third fastest qualifier of 2:37:29 in the 2015 London Marathon, now over a year ago. She’s raced sparingly since but proved his fitness nonetheless, which was always to get her the nod.

Again, it’s hard luck on Ganiel, a clubmate of Connolly’s at Belfast Harriers, who ran her qualifier of 2:38:53 also in Seville in February, and on Sunday, also won the Leiden Half Marathon in the Netherlands, the difficult conditions resulting in a slow time of 78:28, unlikely therefore to swing that third spot in her favour.

Also confirmed was the Rio selection of race walkers Rob Heffernan (50km and 20km), Brendan Boyce (50km), and Alex Wright (20km). Heffernan will make his own piece of history in Rio as the first Irish athlete from any sport to compete in five summer Games.