Dean Walsh has to settle for a bronze medal after his bout in Samokov, Bulgaria 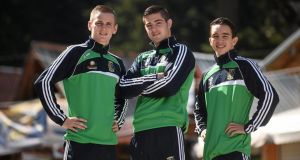 Michael Conlon is through to the European Boxing Championships final after a dominant win over fiery Italian fighter Francesco Maietta in Samokov, Bulgaria on Friday.

Conlon advanced to the bantamweight final after winning on all three cards, putting away his pumped up opponent 30-27, 29-28, 29-28. The Italian was out of the blocks quickly, all guns blazing, but failed to make any meaningful contact against his evasive Irish opponent.

Conlon will now fight Kezz Ashfaq tomorrow after he too won his bout 3-0. That sets up a repeat of the Commonwealth Games final between the two in which the Belfast born boxer beat the English fighter to the Gold medal. A year later and Conlon is now guaranteed at least a silver medal in these championships, but will no doubt be confident of going one better.

Joe Ward is also through to the light heavyweight final after he produced an impressive performance to get past Croation first seed Hrvoje Sep.

Ward will step into the ring with Peter Mullenberg, from the Netherlands, in Saturday’s final.

There was no such joy for Wexford’s Dean Walsh who lost 29-28 on all three cards to Russia’s Vitaly Dunaytsev in his light welter weight semi-final. He though does leave with a bronze medal, after a promising tournament.