Japan to begin letting Olympic athletes in from next month – report 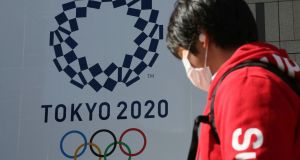 The Olympic Games in Tokyo are scheduled to open on July 23rd, but recent polls show about 80 per cent of Japanese people want the Olympics cancelled or postponed. Photograph: Koji Sasahara/AP

Athletes participating in this year’s Olympic Games in Tokyo can begin entering Japan after it lifts its emergency declaration order next month, the Nikkei newspaper reported on Friday.

Nikkei reported that the emergency declaration is set to be lifted on March 7th, with the travel ban on foreign athletes removed shortly after.

The report added that Olympic athletes will not be required to self-isolate for two weeks on arrival to help them prepare for the Games, set to begin on July 23rd, but they must restrict themselves to their accommodation and sports venues.

Japan has temporarily suspended exemptions allowing foreign athletes to train in the country ahead of the Tokyo Games as it closes its borders to contain a surge in Covid-19 cases.

Earlier this month Olympic officials unveiled the first of many Covid-19 rules for the Games, starting by banning singing and chanting during events and mandating participants to wear masks at “all times” except when eating, sleeping or outdoors.

More than 70,000 people – including athletes, coaches and media representatives – are expected to enter the country for the Games, the Nikkei report said, citing estimates in Japan.

It added that the Japanese government could raise the cap on spectator capacity at sports venues to about 10,000 fans one month after the emergency orders are lifted, with prefectures allowed to raise the maximum capacity to 20,000.