23-year-old Ailish Sheehan, from Co Limerick, fell on a footpath in Poznan 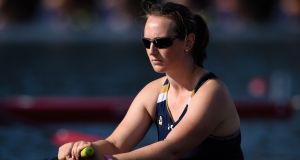 Ailish Sheehan, (23), is from Kildimo, west of Limerick city.

An Irish rower has sustained serious head injuries in a freak fall, hours after winning a bronze medal at the FISU World University Rowing Championships in Poznan, Poland.

Ms Sheehan’s family, including her parents John and Catherine, and sisters Niamh and Aine, are keeping a vigil at her hospital bedside.

“Ailish is in a critical condition. She will need more tests Wednesday and Thursday,” a family spokesperson said.

Ms Sheehan, a former member of St Michael’s Rowing Club, Limerick, was rushed by ambulance to hospital following the incident where she was placed on a life-support machine.

Her father John, a former Cork minor hurler, who previously trained the Limerick senior hurling team, is a coach with Kildimo GAA Club and a PE teacher with St Clement’s school, Limerick.

Sheehan rowed in an Ireland four at the World Under-23 Rowing Championships in 2013 with Lisa Dilleen, Emily Tormey and Aifric Keogh. They finished fourth.

Prior to concentrating on rowing, Ms Sheehan had established herself as one of the leading javelin throwers in Ireland, and represented her country at International Schools level, and later at the Celtic Games in Scotland.

In 2011, she accepted an athletic scholarship to Notre Dame, one of the leading universities in the USA. She has also rowed for Ireland at youth level.