Ireland remain on front foot in search of quarter-final slot 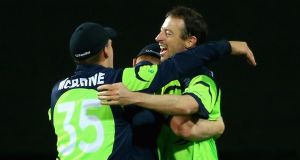 Alex Cusack of Ireland is congratulated by team-mates after getting the wicket of Zimbabwe’s Tawanda Mupariwa to secure a five-run victory during the World Cup Pool B game in Hobart. Photograph: Quinn Rooney/Getty Images

Although many outside the squad are already looking forward to next Sunday’s final Pool B game against Pakistan in Adelaide, the squad themselves will go into Tuesday’s clash with world champions India in Hamilton, New Zealand (1am Irish time) intent on taking the quickest route to the last eight.

The quickest route between Hobart and Hamilton still involved stop-offs in Sydney and Auckland in a long day’s travel on Sunday, with Phil Simmons’s squad having just one day to prepare for the sold out game against India at Seddon Park. And even though they had a longer journey to New Zealand’s North Island from Perth, they have enjoyed the luxury of an extra 24 hours after their four-wicket win over West Indies at the Waca on Friday.

That result was enough for India to qualify for the quarter-finals with two games to spare, but Ireland captain William Porterfield expects no gifts from MS Dhoni’s side, who also have the motivation of breaking their record of consecutive World Cup wins and make it nine on the bounce.

Asked whether be believed India would take their eye off the ball, Porterfield said: “No, I don’t think their guard will ever be down. They’re a squad of 15, so whatever they decide to do, they decide to do.

“It’s a long tournament, and they’re not going to look to lose any momentum from their point of view.

“We’ve just got to keep all the momentum going and keep on improving at the little things we want to and keep taking things forward.”

India’s success in this tournament has come down to some stingy bowling from a settled attack in which their pace bowlers have swung the ball regularly.

Ireland’s batting line-up has certainly been behind their success so far with Ed Joyce’s 112 and 97 from Andrew Balbirnie helping them make 331 for eight against Zimbabwe, a new Irish record ODI score, two more than in the famous run-chase against England in Bangalore.

The African side had their own middle-order heroes in skipper Brendan Taylor, who made a brilliant century, and left-hander Sean Williams, who made 96 before being brilliantly caught on the boundary by John Mooney.

With Zimbabwe making 326, Cusack’s figures of four for 32 were truly outstanding, but Ireland will likely require a few more bowling heroes to take down the defending champions.