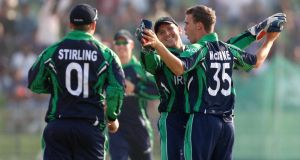 Ireland spinner Andy McBrine celebrates with Gary Wilson after taking a wicket in the World T20 first-round game against Zimbabwe at Sylhet in Bangladesh. Photograph: Surjeet/Inpho

Ireland came through a nerve-racking final over to win their vital opening game at the World Twenty20 over Zimbabwe by three wickets in Sylhet, Bangladesh.

Chasing 164 for victory, Ireland had been given the perfect start by Paul Stirling’s man of the match knock of 60 off 34 balls, while Kevin O’Brien hit a six and two fours in the 18th over to leave just seven required from the last two overs.

O’Brien departed off the final ball of the 18th over Tinashe Panyangara, with Ed Joyce and Stuart Thompson running just three singles off the penultimate over from Tendai Chatara.

The equation was still firmly in Ireland’s court but after two singles came off the first two ball, Panyangara bowled Joyce for 22 with a late swinging delivery that clipped his leg stump.

Max Sorensen was run out by a direct hit from Sean Williams from mid-off, but Thompson steered the ball to third man to level the scores and bring back memories of the tied World Cup game between the sides at the 2007 World Cup.

Alex Cusack was the man to face the last delivery and when he failed to get the bat on the ball, Zimbabwe wicketkeeper and captain Brendan Taylor failed to hit the stumps as Thompson scampered through to make his ground despite a mid-pitch collision with the bowler.

Stirling and skipper William Porterfield (31 off 23) got Ireland’s chase off to the perfect start with an opening stand of 80 in 50 balls.

Andrew Poynter (23 off 15) and Joyce added 29 to set up what looked at that stage like a comfortable chase, but Zimbabwe’s seam bowlers found some swing as the lights came on in Sylhet, with Panyangara accounting for Poynter and Gary Wilson, who edged to slip second ball.

O’Brien missed a few chances to hit the boundary but the 15 runs he hit in the 18th over proved vital in the end as Ireland got over the line in a tension-filled finale.

Ireland’s spinners helped limit Zimbabwe to 163 for five on a ground with short boundaries. George Dockrell took two for 18 from his four overs, while 20-year-old Andy McBrine enjoyed a dream T20 international debut, the off-spinner taking the wicket of Hamilton Masakadza with his second delivery and finishing with figures of two for 26.

Taylor backboned the Zimbabwe innings, making 59 from 46 balls before holing out at deep extra cover to a great catch from Joyce off the bowling of Dockrell.

Ireland will play the United Arab Emirates in their next match on Wednesday before a final Group B first-round match against The Netherlands, with the group winners going on to play in the Super 10 stages of the competition.