Ireland brush aside Uganda to set up Hong Kong showdown

Victory on Sunday will seal qualification for Bangladesh T20 finals 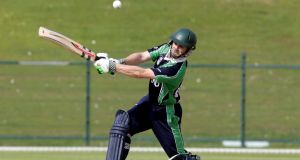 Ireland captain William Porterfield made 33 off 17 balls in the victory over Uganda at the ICC World Twenty20 qualifier at the Sheikh Zayed Stadium in Abu Dhabi. Photograph: 2013 IDI/Getty Images

Ireland will face a Group A showdown against surprise package Hong Kong on Sunday as they look to wrap up a place at next year’s World Twenty20 finals in Bangladesh.

Phil Simmons’s side dismissed Uganda thanks to a 48-run victory at the Sheikh Zayed Stadium in Abu Dhabi on Friday afternoon and look like they are coming to the boil just nicely under the desert sun.

The win puts Ireland on 11 points, one ahead of a Hong Kong side boosted by a large contingent of Pakistan-born players, while hosts the United Arab Emirates are three points adrift with a game in hand.

Victory on Sunday would earn both qualification for the finals and also put Ireland straight into next Friday’s semi-finals of the qualifier and thus avoid a play-off system that will decide the other four teams outside of the two group winners to qualify for Bangladesh.

After winning the toss, Ireland’s batmen made the most of a slow deck against Uganda to make 147 for four from their 20 overs.

Skipper William Porterfield kept up his explosive form with the bat at the top of the order, hitting 33 off just 17 deliveries, with fellow opener Paul Stirling making 16 off 20 before departing to a fine catch from Raymond Otim off the bowling of Roger Mukasa with the score on 35.

The departure of Porterfield in the eighth over saw Ireland’s boundaries dry up, but Niall and Kevin O’Brien ran well between the wickets to keep the scoreboard ticking over.

Kevin O’Brien went for 14 trying to loosen the shackles and hit a six to record his first boundary, but the in-form Gary Wilson joined Niall O’Brien at the crease and the pair put together the key partnership of Ireland’s innings, with 61 runs coming in 50 balls. Wilson was caught at long-on off the penultimate delivery after making 40 from 27 balls, leaving O’Brien unbeaten on 35 from 41 balls.

Trent Johnston struck with the third ball of his first over, but yet again in was the Irish spin duo of George Dockrell (two for 12) and Paul Stirling (two for 23) that squeezed the opposition after the batting powerplay and ruled out any chance of Uganda making a decent fist of their run chase.

At the end of their spells, Uganda were 66 for five with six overs remaining and still 82 runs short of victory and they would end up making 99 for seven as Ireland recorded another comprehensive victory.

Hong Kong also impressed in their 67-run victory over the United States, with skipper Jamie Atkinson, a team-mate of Porterfield’s at Warwickshire, making 74 in a total of 169 for four.

Wilson pointed out that Ireland have a bit of homework to do on their opponents ahead of the game.

“I’m not going to lie, we don’t know a huge amount about them. We do have them on video, so we’ll sit down and have a look on Sunday morning or Saturday evening before the game,” said Wilson. “They’re obviously playing some good cricket, but you know we’re playing good cricket as well and we’ll be confident going into the game.”