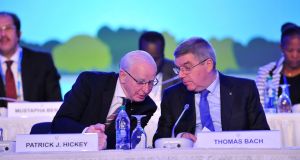 Calls for Pat Hickey’s passport to be returned on medical grounds may or may not be falling on deaf ears in Brazil although they have now reached the top of the International Olympic Committee (IOC).

IOC president Thomas Bach – previously silent on the Rio ticket-touting allegations which first rocked the Games over three months ago – has made his first direct comment on the matter, also stating: “For us, it is very clear that the presumption of innocence prevails”.

Both men sit together on the IOC executive committee, although Hickey stepped down from that role in the immediate aftermath of his arrest in Rio back on August 17th on charges of ticket-touting, and likewise from his position as president of the Olympic Council of Ireland (OCI).

Last week, the family of Hickey also reiterated their calls for his return home on medical grounds, indicating he is suffering from atrial fibrillation, a heart condition.

The 71-year-old has been in Rio since late July, and although freed on bail, is still awaiting a trial date.

Bach, speaking to the Inside the Games website at the IOC headquarters in Lausanne, said he had not had any personal contact with Hickey in recent weeks, and the matter was “in the hands of the Brazilian authorities at the moment”.

Bach then added: “For us, it is very clear that the presumption of innocence prevails and we hope that a good solution will be found to address his [Hickey’s] difficult health situation. And that hopefully he can have his treatment and surgery in Ireland.”

In September, Brazilian police released details of a series of text messages between Hickey and Bach, and appeared to suggest Hickey had personally lobbied the IOC president for more tickets for high-profile events at the Rio Games, although there was no subsequent investigation into the matter.

Nor was it made clear if Bach replied or took any action relating to Hickey’s request.

Bach’s comments follow last month’s general assembly of European Olympic Committees, which voiced their “concern and outrage” at both his treatment by the Brazilian authorities and lack of intervention by the Irish Government.

Hickey’s situation is also likely to be raised at the general assembly of National Olympic Committees (NOCs) in Doha next week. He also acted as vice-president of the NOCs before his arrest.

Lawyers representing Hickey are still awaiting a response from the special court in Rio de Janeiro, regarding the release of his passport and liberty to leave Brazil.

Last week, the prosecutor told Arthur Lavigne, senior counsel on Hickey’s legal team, that he had not made a decision because of a heavy workload, but that he had promised to analyse the case this week.

Lawyers representing Kevin Mallon, who works for ticketing agency THG and was arrested in Rio on similar charges, have also complained that the Brazilian courts are taking too long to give him back his passport.