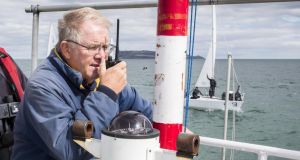 Howth YC’s David Lovegrove: is set to take over as president of the ISA in the spring. Photograph: David Branigan/Oceansport

As the Irish Sailing Association prepares for a fundamental review, succession plans for ISA president Niamh McCutcheon reached an advanced stage at a board meeting of the national authority on Tuesday evening.

The Irish Times has learnt that Howth Yacht Club’s David Lovegrove is the outgoing president’s nominee to take over next spring when her term ends.

Lovegrove is a past commodore of his north Dublin club and a former director of the ISA. An active sailor, he is best known as one of the country’s leading International Race Officers, responsible for managing international championship-grade events as well as local regattas.

His selection by McCutcheon comes hard on the heels of another decision by the Lough Derg YC-led ISA to appoint an independent group of prominent sailors to create a fresh strategy for the association.

Every aspect
Led by Brian Craig of the Royal St George YC, the group has been tasked with examining every aspect of the organisation with the exception of the Performance section that deals with Olympic level competition and has it’s own board.

It was Craig’s role that played a factor in Lovegrove’s decision to accept the nomination that is in turn open to challenge until early in the New Year. “My initial reaction was to refuse it as it’s a massive job that has to be done and I have been outside the organisation,” Lovegrove said last night.

“But when I heard about the strategic review group and that Brian Craig was involved that changed my mind completely; the ISA needs to go through a fundamental change.”

The Puppeteer class sailor wouldn’t be drawn on what his priorities might be though he points to recent ISA board decisions as a source of confidence for the future. “One thing I hear a lot of in clubs is ‘what does the ISA do for me?’ when it actually does quite a lot. The clubs are our customers and we need to deliver and be more proactive.”