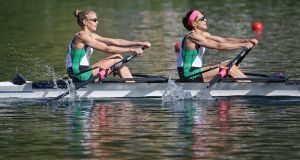 Claire Lambe and Sinead Lynch will be competing in the women’s lightweight double in Rio. Photograph: Philipp Schmidli/Getty Images

Trim and tanned and ready for action, the Ireland rowing team for the Olympics bade goodbye to their home yesterday.

“I think they are the best prepared Irish Olympic rowing team,” said Rowing Ireland chief executive Hamish Adams, at a small function for the three crews and supporters.

The lightweight double of Paul and Gary O’Donovan were full of praise for the just-completed training camp in Banyoles. Paul explained that they will be seeded in the top six in Rio, which should allow them a good programme, with proper rest. All going well, they will have a heat on August 8th; semi-final on the 10th and the final on the 12th.

Sanita Puspure mused on how she is a more mature athlete now than in London, where she won the C Final of the single sculls. Claire Lambe spoke movingly of the honour of finally making the Games after years of challenges.

Her crewmate in the women’s lightweight double, Sinead Lynch, has had a convoluted run; she was a World Champion in 2001, and now finally gets her chance at the big one.

Sam Lynch, twice an Olympian, is now the key supporter for his wife. Someone suggests he is the Bill Clinton of the party. He laughs. “Yeah, the first gentleman.”

The Ireland party flies out today. The Coupe de la Jeunesse, the European junior tournament held in Poznan, Poland, this Saturday and Sunday, will be a test of the depth of Irish underage talent.

There were no wins for Ireland junior crews at the Home International Regatta last weekend. At the opposite end of the scale, two Ireland junior doubles – Aoife Casey and Emily Hegarty and Daire Lynch and Ronan Byrne – head for the World Championships in three weeks’ time with high hopes.

In the middle is the Coupe. Ireland sends four crews: a boys’ quadruple and four and a girls’ quadruple and pair. The girls’ quadruple has the best chance of medalling – Bann girls Hannah Scott and Fiona Chestnutt won at the Homes last year and have pushed Casey and Hegarty hard in doubles races this season. They team up with Margaret Cremen of Lee and Lucy Taylor of Belfast Rowing Club.

The Carrick-on-Shannon Sprint Regatta holds that little niche in the rowing calendar for a post-season fun event.

On Sunday, it will also host the final leg of the Waterways League, for junior 14 and junior 15 rowers.