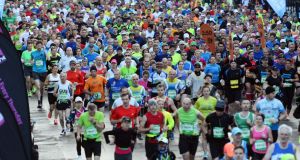 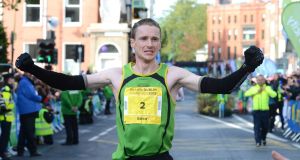 It was surely the sweetest Dublin Marathon victory in 20 years, Sean Hehir becoming first Irish men’s race winner since John Treacy in 1993 – although not before surviving a classic distance running duel with Joe Sweeney.

Because when Sweeney opened a slight gap on Hehir approaching the 20-mile mark it seemed the race might also have its first Dublin-born winner since John Bolger, back in 1990. Instead, Hehir bided his time and then counter-attacked, just on the 20-mile mark, and after that the Clare runner maintained his slight advantage until the finish, his winning time of 2:18:19 just a minute outside his best.

The look of utter relief and joy on Hehir’s face proof of how special it felt to end that long wait – and among those to greet him at the finish was his coach and former three-time Dublin Marathon winner Dick Hooper.

“It was all about the win,” said Hehir. “That’s all Dick Hooper was telling me... ‘just win, forget about the time’. Now I am a little disappointed with the time. But without the Kenyans this was a once in a lifetime opportunity. I’ve been living here in Dublin for over 10 years, since I was 17, and to win this race, [I’m] absolutely delighted. Only coming round the final corner did I really believe I would win. It’s a very special feeling, it really is.

“Around 12 miles I could feel Joe was itching to go, but I decided to keep my cool. I remember last year I got a little undone towards the end, and didn’t want that to happen again. I just kept within myself, even when Joe opened the gap. Even then I got past him my legs were buckling a little, starting to cramp, and I’d a little incident with a cycle around 22 miles, as well. It was a bit of a struggle over the last few miles, but I have to say, the support was incredible, a great help.

Sweeney had no complaints with his second place, in 2:19:26, in what was his marathon debut: “I think maybe I got a little carried away with myself, when leading for that 2-3k, and paid dearly for it. Sean though ran a great race. I don’t think I could have got any nearer to him today. But I enjoyed the experience. I will have to make another attempt before I know for sure if I’m really cut out for the marathon. But I will definitely give it another go.”

In third place was ever consistent Moldovan international Sergui Ciobanu,  based in Ireland for the last eight years, his time being 2:22:02.

The absence of any elite international runners also helped Dublin provide its first women’s winner since Sonia O’Sullivan in 2000, this time in the form of local Dublin athlete Maria McCambridge, who clocked 2:38:51. 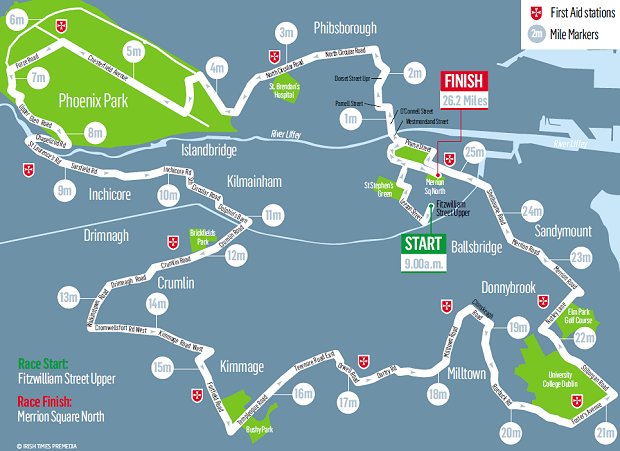 Yet the 38 year-old McCambridge also had to survive a nervous duel with Cork runner Claire McCarthy, who actually edged in front around 18 miles after McCambridge was forced to make a bathroom stop. She kept her cool and her pace and slowly drew McCarthy in, passing her with two miles to go. McCarthy still ran well to take second place in 2:39:27, a full nine minutes quicker than her previous best. Also running well to take third was Tullamore veteran Pauline Curley.

“It’s a great feeling to win my home town marathon, something I’ve always wanted to do,” said McCambridge.“It was tough, and I had to take a pit stop around 18 miles. My legs just started to go on me as well. I just had to run through it, and it was big battle, but I’m very proud now to have finally won Dublin.”