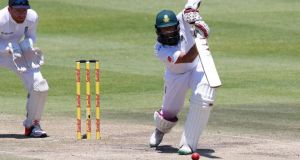 South Africa’s Hashim Amla drives off the front foot during his innings in the second Test against England in Cape Town. Photograph: Mike Hutchings/Reuters

It was inevitable perhaps but there really was a feeling of after the Lord Mayor’s Show at Newlands. In no way is this to blame South Africa: rearguards in adversity are a part of Test cricket. Slaughtered by Ben Stokes and Jonny Bairstow, and facing a total in excess of 600, there was already nothing more for which to play than the draw, which – unless something dramatic happens on the final two days – will be the outcome of the second Test.

South Africa will resume the fourth day on 353 for three, a deficit of 276, with Hashim Amla, unperturbed all day, on 157 and Faf du Plessis parked on 51, their fourth wicket partnership worth 85.

With a single wicket only in the day, the next six sessions could be a trial. So far, there would be more chance of Chris Gayle showing a sense of self-awareness than of a bowler running through the opposition. Bowling has been reduced to drudgery, and batting to a pedestrian exercise in staying power rather than run-gathering.

When deep into the final session, South Africa had faced more deliveries than England had in their first innings, but for 283 fewer runs. This is not to say the batting has not been of the highest class. Amla’s 24th Test hundred has been an exhibition of balanced elegance and judgment, the sort of innings he had been threatening to play since some careful analysis of his technique before the second innings in Durban.

There might have been a century for AB de Villiers too, although those who were anticipating a riposte in kind to Stokes’s innings were disappointed. In the end England perhaps managed to play on his ego with some short-pitched tactics while the second new ball had a semblance of hardness left in it, and he was dismissed for 88, although not before he and the South African captain had added 183 for the third wicket.

England had not made things any easier for themselves by squandering chances. When the ball is soft and the pitch as true as a marriage vow, the bowlers need all the back-up they can get. All opportunities need to be taken, even the half-chances which can do so much not just to bring the wickets but to lift the spirits on hot energy-sapping days.

Three such chances have been missed by England in this innings. The first of them, on the second evening, had come when De Villiers, then five, edged Jimmy Anderson fast at waist high to the right of Joe Root at second slip. The fielder was late in sighting it and the ball burst through his hands. That he had failed to spot the edge sufficiently early was later confirmed: he had lost it against the background of the multitude of red sunshades that occupy Castle corner at what would have been wide long on to him. That they billowed in the wind may have been a further distraction. Twenty four hours on and they had been dismantled.

Around half an hour before lunch on the third day, Alastair Cook had brought on Root for a couple of overs. Now he tossed one up, fullish length just outside offstump, tempting Amla – then still 24 short of his century – into a drive. The edge flew fast to Anderson, at slip, a waist-high chance, which is unusual for a position where the majority of catches from pushes and such drives tend to go lower. It was a reflex catch but one that needed taking. Amla escaped, Root’s debt to Anderson expunged.

Then again, before tea, Amla well past his hundred, on 122, and with Steven Finn busting a gut to extract some response from the pitch, he banged one in short, Amla swatted at it, and sent it just wide of Nick Compton at backward point. Again it appeared he had picked up the flight of the ball late, although the background cannot be blamed for that. The chance went begging. Even on such a surface England had created their moments but were unable to take advantage.

There was a serenity about Amla’s batting. This has been a tough year for him as a batsman and captain, but in Durban, a close analysis showed that with an initial movement of his back foot towards leg stump, and a tendency to want to work the ball to leg anyway, he was closing himself off to the bowler, hitting around his front pad. By the second innings, he had rectified that, the dividends evident now. By nature he plays square of the wicket on either side, with scarcely a run coming in the arc between extra cover and midwicket. He clips off his toes, forces the ball away backward of point for his boundaries, and collects his bread and butter legside singles either side of the square leg umpire. Only when Finn had his dander up did he look anything but unruffled.

Against Amla, and during his partnerships with De Villiers and Du Plessis, England toiled, trying variously the old South Africa tactic of bowling wide of the offstump to a loaded field, a bit of a bouncer session with men out in the hope of a mis-hook, a change of angle from around the wicket and some attempt to get the ball to reverse by going full and straight.

There was even a three over spell from Alex Hales, of a kind that scares batsmen to death lest they actually get out to it. Out of this, it was Finn, sensibly used in short bursts, with the instructions to slip himself, who looked the likeliest bowler to take wickets.

He disconcerted all three batsmen at times with his pace and lift and deservedly making the only breakthrough of the day shortly before tea, when De Villiers could not resist taking on yet another short ball but pulled it high to midwicket where Anderson parried it up and then caught the rebound.

Bale and Dele Alli score as Tottenham qualify with draw in Austria 21:12
Connacht use visit of Benetton to give as many players as possible match time 20:51
Celtic surrender two goal lead in AC Milan defeat 20:16
Fans told not to excessively sing or hug as Premier League crowds return 20:02
Gillane’s chances of playing against Waterford rated ‘50-50’ 19:20