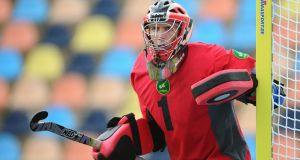 Irish goalkeeper David Harte became the first Irish hockey player to be offered a lucrative contract with the professional Hockey India League. Harte has been picked to play with the Dabur Mumbai Magicians.

The Indian League was introduced in 2013 and will begin again on January 23rd culminating in the finals at the end of February. Last year’s final between the Ranchi Rhinos and the Delhi Waveriders attracted over 30 million people.

Around the world
Harte was part of a group of 154 players from around the world who went to auction. Of that pool 49 were picked up by the six franchises, who spent a total of $1.37 million. The most expensive player was India’s Ramandeep Singh who went to the Pradesh Wizards for $81,000, while the Irishman’s price tag was $11,000

“I am absolutely delighted,” said Harte. “An opportunity to play in a fanatical hockey country like India for the five or so weeks is something I am very excited about. Add to that touring around six different cities, the packed stadiums, screaming fans and world class players that will be present make for perhaps a once in a lifetime experience.”

Move to Mumbai
The move to Mumbai has the blessing of Irish coach Andrew Meredith, who now has a chance to look at alternative goalkeepers, notably Davy Fitzgerald. “He has been continually recognised and rewarded as one of the world’s elite keepers winning various awards, and to participate in a professional league will be a great test for him,” said the Irish coach, who plans to take the Irish squad on winter training in the new year.

Hockey culture
“To play in India, and spend six weeks in a hockey culture inside a country where viewing figures are consistently over 40 million people for hockey, will give him a great platform to compete with the world’s elite, which I have no question that he will embrace and excel in as Irelands sole representative for this edition. Mumbai is a great city with a very strong hockey history and tradition, and it will be an absolute experience of a lifetime for him.”
WEEKEND FIXTURES
Saturday – Irish Senior Cup second round: Glenanne v Kilkeel, Glenanne Park, 1pm; Portadown v Monkstown, Portadown, 1pm; Belfast Harlequins v Three Rock Rovers, Deramore Park, 2.30; Cookstown v Pembroke Wanderers, Coolnafranky, 2.30; Fingal v NICS, ALSAA Sports Complex, 2.30; Mossley v Corinthian, The Glade, 2.30; Lisnagarvey v UCD, Comber Road, 2.45; Cork Church of Ireland v Banbridge , Garryduff, 3pm.