Guilfoyle going for gold in Tavira 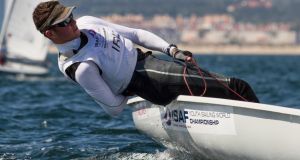 Seafra Guilfoyle will be going for gold at the ISAF Youth Worlds in Tavira, Portugal today.

Cork’s Seafra Guilfoyle lost his week-long lead late yesterday evening but can still deliver Ireland’s first ever gold at the ISAF Youth Worlds today if the winds in Tavira, Portugal can blow in his favour.

After a carving out a 10-point lead since Monday with five top-six results (1, 5, 2, 6, 5) the young Royal Cork man faltered on Wednesday evening, scoring 17th in his 57-boat fleet.

And in spite of another fine display of light air skills the gauge closed considerably on the Munster helm yesterday when Singapore’s Ryan Lo halved the margin in race seven in less than five knots.

Guilfoyle scored another top 10 – a seventh – but it wasn’t enough to stop his lead being cut to four points with two races still left to sail.

The Crosshaven sailor is now seven points adrift of first but with all to play for in today’s final round.

Guilfoyle was national champion in 2008 and 2009, winning all the provincial championships in those years too, except the 2008 Munsters.

In 2011 he graduated to the Laser 4.7 rig and became class national champion at the first attempt.

He posted 15th at the 2011 4.7 Europeans and this month in a major boost for this week’s regatta, he scored sixth place from 155-starters at the European Laser Youth Championships in Denmark.

Having won the Commodores’ Cup in 2010, Ireland returns to Cowes tipped as favourites for this weekend’s RORC biennial regatta for amateur national three boat teams with one of the strongest line-ups of the nine competing teams.

Royal Cork’s Anthony O’Leary resumes his duties as Irish team leader and skipper of his Ker 39, Antix. The Irish “big boat” is American Marc Glimcher’s Ker 40, Catapult, while making up the trio is a former IRC Nationals winner, Peter Rutter’s Grand Soleil 43, Quokka 8, chartered for the occasion by Niall Dowling and RORC Vice-Commodore Michael Boyd. Competition starts at 11am on Sunday with two inshore races.