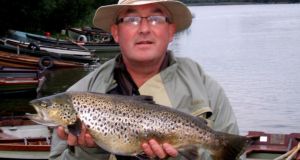 Declan Conlon, Co Kildare, winner of the visitor section in the Cavan/Monaghan Garda Competition Championship on Lough Sheelin, with his 2.7kg trout caught on a Pearly Claret Dabbler

‘DON’T forget, Brown Island for barbecue at one o’clock,” Cyril Boggins bellowed across the canal section at Ross Castle on Lough Lein in Killarney as anglers prepared for the Last Chance competition on the final day of the game-angling season.

Sponsored by local luminary Mike Hegarty, this annual event has become more of a social occasion with emphasis on steaks, onions and potatoes cooked on a roaring log fire rather than the last throw of the dice for another season.

The day also had a charitable tone with proceeds going to the Irish Pilgrimage Trust. Accepting a cheque for €750, Tim O’Brien said: “We send 500 kids to Lourdes each year and this generous donation will help greatly towards this worthy cause.”

Fishing wise, it was a case of chasing shadows and the odd puff of wind to whet the appetite. Yet while small fish – under 25.4cm (10in) – were in abundance, 27 exceeded the cut-off mark for most of the 44 competitors.

I teamed with Francie Kiely from Macroom and together we tried both ends of the lough from Sweeney’s Shore to the Lake Hotel. Along the way he pointed to the “Chicken and Hens” landmark, a rock formation from the Ice Age; “Rabbit Island” shaped to resemble a stooping rabbit and the “Postbox”, on a rock edge in a remote area.

But the day belonged to the barbecue. Cyril had the log fire under way on our arrival with large frying pans heaped with onions and potatoes, and sizzling steaks – and all washed down with a glass of wine.

At the prizegiving and dinner in the Dromhall Hotel, Gerry O’Sullivan from Millstreet was declared the winner with two fish for 0.441kg. “I fished with my son Jonathan in the Glena Bay area and caught both fish on a Jungle Bunny and Kate McLaren,” he said.

On a sad note, a minute’s silence was observed as a mark of respect for Cyril’s father, Cyril snr, who passed away earlier in the day.

The Cavan/Monaghan Garda Championship and Open Competition was held on Lough Sheelin, also on closing day. The morning was cold and overcast but as the day progressed, conditions improved, making the event a great success for the 124 participants, with a weigh-in of more than 20 good-sized trout, some of which were later released.

The winner of the Garda section was Joe O’Connor with a 0.85kg (1.14lb) trout and the visitor’s winner was Kildare man Declan Conlon with a terrific trout of 2.7kg (6.1lb) caught on a Pearly Claret Dabbler between Church Island and Kilnahard.

According to the Worldfishing and Aquaculture website, the Norwegian authorities have recently ordered that some two million sea-lice-infested farmed salmon in the Vikna district of Nord Trondelag be slaughtered with immediate effect after becoming resistant to chemical treatments against the sea-lice parasite.The action is intended to protect smolts migrating through the fjords to the open sea next May and June from huge numbers of juvenile sea-lice being produced on, and released from, particular salmon farms that have been unable to control their lice numbers.

A construction company was successfully prosecuted last Monday in the District Court by Inland Fisheries Ireland following investigations into a fish-kill on the River Dodder of a discharge of chlorinated water during commissioning of a new water supply pipeline. The fish kill occurred on the March 1st when more than 3,000 fish, including brown trout and lamprey, were killed over a 2.5km stretch of river from Boherboy Water Supply Pipeline to upstream of Firehouse Weir.