Kenyans take clean sweep in steeplechase, while shock of day came in the pole vault 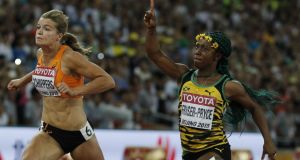 Jamaica’s Shelly-Ann Fraser-Pryce celebrates next to Netherlands’ Dafne Schippers as she wins the final of the women’s 100m at the World Championships in Beijing. Photograph: Adrian Dennis/AFP/Getty Images

If perfectly familiar style and consistency are among the last bastions of credibility in athletics right now, then almost everything about day three at the World Championships in Beijing held true. That’s not saying there isn’t still room for the apparently outlandish shock.

Just 24 hours after Usain Bolt reaffirmed his status as the fastest man on earth, Jamaican compatriot Shelly-Ann Fraser-Pryce came out and proved again why she’s still the fastest woman – and certainly in her own familiar style.

With long, dyed green braids flowing behind her, and five yellow sunflowers neatly positioned on her fringe, Fraser-Pryce become the first woman to win three 100m titles, her time of 10.76 seconds enough to hold off the new flying Dutch woman of track and field, Dafne Schippers.

With back-to-back Olympic 100m titles already won, plus World Championship gold in 2009 and 2013, Fraser-Pryce, like Bolt, is fast becoming one of the most decorated sprinters in history, and at 28 clearly isn’t finished yet. Unlike Bolt, however, she’s practically dwarfed by her opponents, including Schippers, who ran another Dutch record of 10.81 to win silver, with the American Tori Bowie winning bronze in 10.86.

For Schippers, the former heptathlon specialist, there was no hiding the delight, and she’s now favourite to win gold in the 200m: “Wow, so happy,” she said. “It’s a national record, I’m second in the world, it’s crazy.”

There was some degree of expectation that Kenya’s unrivalled consistency in the 3,000 metres steeplechase might be undone in Beijing, as the new American record holder Evan Jager looked certainly capable of running himself into the medals.

Instead, Kenya not only won all three medals but finished in fourth place too – only the third ever such sweep of positions in World Championships history.

Ezekiel Kemboi, guaranteed a place in Beijing as defending champion, was joined by three other Kenyans, and Kemboi once again proved the best of them.

His burst of speed down the backstretch made it look like he was running in fast-forward mode, and he might well have been. His winning time of 8:11.28 left him with over a second to spare on Conselsus Kipruto, with the “other” Kipruto, Brimin, winning bronze, with Jairus Birech claiming fourth. Jager, who briefly moved into a medal-winning position at the start of the last lap, had to settle for sixth.

So at 33, Kemboi has now won four consecutive World titles in the event, while also winning silver in 2003, 2005 and 2007, and not forgetting his Olympic gold from London 2012. There hasn’t been a more consistent runner in steeplechase history, and again Kemboi does it all in his own perfectly familiar style.

The only other times there have been such a clean sweep was at the 2005 World Championships in Helsinki, when the American men filled the top four places over 200m, and likewise the Ethiopia women over 5000m.

There was nothing unfamiliar either about Vivian Cheruiyot winning her fourth World Championships gold medal, when she out-kicked the best of the over 10,000m – although the Kenyan has been missing largely from the track over the last two years, after giving birth to her first child.

So to that apparently outlandish shock: at his best Renaud Lavillenie is untouchable in the pole vault, and the world record holder came to Beijing red-hot favourite to land the still elusive World Championship title.

If that pressure didn’t get to him, then something else did, as Lavillenie, the 2012 Olympic champion, could only manage a joint bronze, with a best clearance of 5.80 metres. Instead it was Canadian Shawn Barber, the youngest man in the competition and under no pressure, who won gold thanks to his first time clearance of 5.90.