It’s five years too late, but the biggest fight in boxing looks likely to happen on May 2nd 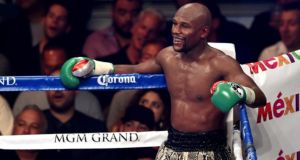 The richest fight in boxing history between Floyd Mayweather and Manny Pacquiao is closer to happening than ever. (Photo by Ethan Miller/Getty Images)

The richest fight in boxing history — a much-anticipated showdown between Floyd Mayweather and Manny Pacquiao — appears closer than ever to happening.

Sam Watson, longtime confidant of Mayweather adviser Al Haymon and one of few in the fighter’s tight-knit inner circle, said Wednesday the final details are being worked out and an announcement for a May 2 fight is imminent.

“They’re putting it together now,” Watson said. “They’re going to do a Showtime-HBO [joint pay-per-view] like they did last time with Lennox Lewis and Mike Tyson. They’re working on the monies now and everything they’ve got to work on to make it happen.

The remarks lent credence to previous reports of a deal-in-progress between the two most decorated fighters of their generation — and marked the first time Mayweather’s team has addressed the fight beyond abstracts.

Mayweather (47-0, 26 KOs) has two bouts remaining on his six-fight, 30-month contract with Showtime and CBS — the landmark deal worth a potential $250 million he signed in February 2013 — yet the supply of credible opponents is running dry. Pacquiao (57-5-2, 38 KOs), an eight-division champion, is aligned with HBO, though a rare detente between the network rivals could make the welterweight summit a reality.

Both fighters’ pay-per-view buy rates have trended down in recent outings as dissatisfaction over their refusal to fight one another has approached a critical mass.

Watson spoke on behalf of Haymon following a news conference at Rockefeller Center on Wednesday to announce a multiyear agreement between NBC and Haymon Boxing that marks the sport’s return to prime-time network television.

Haymon — a Salinger-level recluse who rarely ventures into public, refuses all interviews and has been said to have no office or answering machine — is widely regarded as boxing’s most powerful figure, not least for his role as architect of Mayweather’s rise to world’s highest-paid athlete.

He did not attend Wednesday’s announcement in Studio 8H, home of Saturday Night Live, though Watson wryly admitted he was in the building.

Seldom do two fighters considered the best in the sport come from the same weight class — and rarer still are both roughly the same age. A superfight between Mayweather and Pacquiao was a fight the public made years ago and its failure to materialize has represented an indictment of a sport.

But while a deal should have been struck years ago when both were nearer their athletic peaks, there’s no question it remains the biggest fight that can be made today. If set for May, Pacquiao will be 36 and Mayweather will be 38, though both still rate among the world’s best fighters regardless of weight.

“It’s a fight that’s going to break all records,” said five-division champion Sugar Ray Leonard, whose 1987 showdown with Marvin Hagler was subject to similarly laborious negotiations. “The numbers are going to be awesome, incredible.”

If it happens. But it’s looking better than ever.

“He’s my best friend, I work for him, I’m with him every day,” Watson said, stressing that he spoke for Haymon. “I believe it’s going to happen. I believe that everybody involved wants it to happen. I know Floyd wants it.”