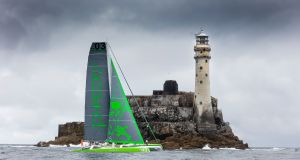 The addition of a multihull class to the forthcoming Volvo Round Ireland Race is starting to gain traction following the announcement that multiple record-holder Phaedo has entered the 704-mile race.

But that record is for the round Ireland course rather than the race, the difference being that such outright record attempts are usually scheduled only when weather forecasts are favourable.

While the main fleet will get underway at 1pm on Saturday, June 18th, 10 minutes later the multihulls will sprint southwards which should make for some interesting overtaking manoeuvres approaching Wicklow Head.

So far, just one other MOD70 has entered as one of the three-boat Team Concise from Britain.

Total entries to date are 10 boats but, as the online entry only opened this week, numbers are already ahead of previous years. Still expected to enter is George David’s maxi Rambler 88. And, while the speed-machines always attract added attention, in it’s heart the Round Ireland Race is a monohull affair and the presence of the multihulls is more of a nod to progress and in part, a novelty too.

For that reason, the overall victor’s title of the race is still decided on IRC handicap with the line honours trophy typically won by the largest monohull competing through the multis will certainly be faster again.

Sailing schools have grown in popularity as entries in offshore races with many crews training outside the traditional club structures for achievements such as this race.

At 704-miles, it lays claim to being the longest offshore circumnavigation alongside the Round Britain & Ireland Race. Wicklow Sailing Club organisers hope that eventually the Round Ireland will be held in the same standing as races such as the Middle Sea Race (Malta) or the Sydney Hobart and Fastnet Races.

Other changes to the race format include keeping the entire event to within a week with the overall prize-giving set for Wicklow on the Friday following the start even though some of the smaller crusing-boats will probably still be at sea but out of contention for the main prizes.

Also new for 2016 and beyond is the addition of Volvo Ireland as title sponsor. The addition of the Round Ireland to their sponsorship line-up alongside Cork Week and the Dún Laoghaire Regatta marks their “triple-crown” of the best-known events that Irish sailing has to offer.