Finish Lines - The Games in Quotes

‘I don’t need to prove anything. What else can I do to prove to the world I’m the greatest’ 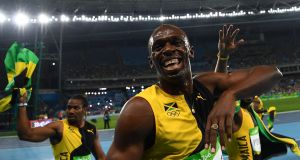 Least Gracious: “We played a bunch of cowards. The best team did not win today. Sweden didn’t want to play great soccer. I don’t think they’re going to make it far in the tournament.” – United States goalkeeper Hope Solo after that quarter-final penalty shootout defeat to Sweden.

Strategy: “It isn’t too complex really, just A to B as fast as you can go. Close the eyes and pull like a dog.” – Paul O’Donovan revealing the secret to the Cork brothers’ success.

Feint Praise: “I have a lot of respect for Honduras – but they play baseball they don’t know anything about football.” – Diego Maradona trying (but failing) to salute the Hondurans after they ensured Argentina’s exit from the Olympics after drawing in their group.

Tourist of the Games: “Since we got here, we’ve gone out to the beach, the big Jesus or whatever you call it, all that good stuff.” – American equestrian person Clark Montgomery after meeting Christ the Redeemer.

Almost: “I rode it to the max. I got to 200m and I thought ‘oh my God, this is going to happen!’. Then they passed me.” – American cyclist Mara Abbott on how her Rio road race went perfectly – apart from the last bit.

Divine Intervention: “My doping is my training, my doping is Jesus. Otherwise, nothing. I am crystal clear.” – Ethiopian Almaz Ayana explaining how she smashed the world record in only her second competitive 10,000m.

No Excuses: “I ran like a dick. It’s pretty much simple as that.” – British sprinter Martyn Rooney after his surprise elimination in the 400m heats.

Beyond The Call of Duty: “I felt it go, but I just thought I’d carry on . . . that’s life, isn’t it? I knew it was bad, I could feel it straight away, but hey.” – Irish gymnast Kieran Behan on continuing his floor routine . . . despite dislocating his knee.

Tallest Tale: “And then the guy pulled out his gun, he cocked it, put it to my forehead and he said, ‘Get down,’ and I put my hands up, I was like ‘whatever’.” – Ryan Lochte on that robbed-at-gunpoint report that would have made him the coolest man on the planet . . . if, you know, it had actually happened. The One And Only: “I’m not the next Usain Bolt or Michael Phelps. I’m the first Simone Biles. ” – There’ll probably never be another one, either.

Most Nauseous: “The whole venue smells like somebody has farted.” – German diver Stephan Feck a little green about the gills at the sight of the colour of that water.

Suspicious Minds: “Sun Yang, he pisses purple. When I see the 200m podium I want to be sick. I am very sad when I see my sport getting like this. I hope that FINA is going to do react and stop this massacre, because it is getting sad.” – French swimmer Camille Lacourt stopping somewhat short of congratulating the Chinese man, and former doping offender, for winning 200m freestyle gold. Katie: “The Olympics is a dream of mine. I felt very well prepared coming into this first and I felt very confident. I gave it my best shot, but it just doesn’t happen sometimes. Sometimes the plans in your heart aren’t God’s plan.” – A shellshocked Taylor after her Olympic exit. Gender Equality: “Well, Angela Merkel runs a whole ****ing country.” – Swedish football coach Pia Sundhage on being asked if she could coach a men’s team.

Centenary Celebrations: “We had a cracker of a race there . . . with the year that’s in it, it was great to beat the Brits as well.” – Paul O’Donovan after qualifying for the final.

No Complaints: “I still have two arms, two legs and I’m leaving Rio with a smile – so the green water doesn’t matter.” – Canadian diver Jennifer Abel, counting her blessings. Career Change: “Looking for a caddy?” – Paddy Barnes’s query for Rory McIlroy after his Olympic exit.

And You Thought It Was Only Sport?: “Australia is mentioned as a country at the fringes of civilization. In some cases, they refer to the country’s early history as Britain’s offshore prison. This suggests that no one should be surprised at uncivilized acts emanating from the country. We should think the same way.” – An editorial in China’s Global Times in response to Australian swimmer Mack Horton’s labelling of Chinese rival Sun Yang as a “drug cheat” due to his doping past. A Day To Remember: “Tiocfaidh ár lá.” – Our own Paul O’Donovan after Irish rowing’s day arrived with silver.

Hostile Hosts: “In 1936, the crowd was against Jesse Owens. We’ve not see this since. We have to deal with it.” – French pole vaulter Renaud Lavillenie after being consistently booed by the home crowd while he battled with Brazil’s Thiago Braz Da Silva for gold. Signed, Sealed, And Undelivered: “Normally I ride to Stevie Wonder titles but suddenly they told me I don’t have the rights to use that. I can live without a lawsuit from the Stevie Wonder company.” – Sweden’s Patrik Kittel on having to change the music to his dressage programme. Half-time Chat: “I wanted to enter the women’s changing room and either hang myself or hang everyone.” – Russian handball coach Yevgeny Trefilov after his team trailed South Korea at the break. Naturally, they won in the end. Bunkering Down: “Listen here you hating piece of shit trolls. I’ll say it once he didn’t work his ass off his entire life for a gold medal he achieved his MAJOR and let everyone else do what they need to do and leave my fanf***ingtastic man alone.” – Paulina Gretzky, fiancée of Dustin Johnson, rather passionately defending her man’s absence from the Games. Blood Sport: “That was the most difficult bout I’ve ever fenced in my life. There was enough adrenaline to kill an elephant.” – American fencer Jason Pryor after losing to Switzerland’s Benjamin Steffen. Unbeatable: “It is clear that if you do not play at your 150 per cent against these women they will win by 40 points. And if you play at your 150 per cent perhaps they will win by 40 too.” – Spanish captain Laia Palau on the all-conquering American women’s basketball team. When You Muddle Your Lanes: “Ryan Lochte is going to beat Michael Phelps in this event in the Games! And Phelps might not even make the podium!” – Canadian commentator Elliotte Friedman during the 200m individual medley final, when he thought Ryan Lochte (who finished fifth) was Michael Phelps (who won) and Michael Phelps was Ryan Lochte. “I’m sorry everyone. I blew it. No excuses,” he tweeted. Choking Back The Tears: “It is possibly the greatest choke in Olympic history. I almost needed someone to give me a Heimlich manoeuvre to help me out there. It hurts.” – Australian swimmer Cate Campbell after a Games that delivered zilch in individual events. Most Conned: “They’re ****ing cheats . . . they’re known for being cheats. They’ll always be cheats. Amateur boxing stinks from the core right to the top.” – Michael Conlan lets rip. You What?: “Since the beginning of Rio 2016, AIBA has conducted 250 bouts and remains fully committed to a zero policy towards fair play in boxing . . . ” – There were those who suggested the original statement from the International Boxing Association was a frank admission. Then they edited it.