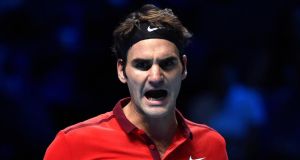 Novak Djokovic won his third consecutive ATP World Tour Finals title on a walkover after Roger Federer pulled out ahead of the match.

The world number two fought for almost three hours to defeat countryman Stan Wawrinka in the semi-finals on Saturday night, saving four match points, and did not leave the O2 Arena until the early hours of Sunday morning.

There was speculation Federer may again have been feeling his back and that only increased when he failed to show up for a scheduled practice session on Sunday afternoon.

The announcement was made following the doubles final, with Federer taking to the court to explain the situation to the fans.

He said: “Unfortunately I’m not match fit to play match tonight. Clearly I wish it wasn’t this way. You try all year to be ready for the ATP World Tour Finals and I didn’t want to end this way.

“I tried everything I could last night and today — painkillers, rest — until the very end, but I can’t compete at this level with Novak. In a final like this and at my age, it would be too risky. I hope you understand.”

5 Sarah Stirk: From pro tennis dreams to the face of Sky Sports Golf