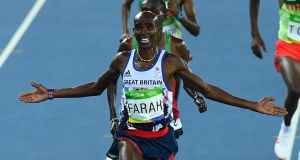 Britain’s Mo Farah celebrates as he crosses the finish line to win the Men’s 10,000m at the Olympic Stadium in Rio de Janeiro. Photo: Getty Images

They say Rio is the city that never sleeps, which is just is well, because it’s around midnight before we sit down for the 10, 000m press conference and five or six questions in before the subject of drugs comes up.

Still, for some people, including it seemed Mo Farah, it’s a little soon for that question; for others though it’s not quite soon enough.

No matter what Farah does on the track these days, it’s the one subject he still can’t quite fend off, and justifiably so: unlike his Kenyan and Ethiopian rivals, whom Farah once again out-kicked to defend his title inside the Olympic Stadium on Saturday night, he may never escape from it.

The problem for Farah is twofold: he continues to produce breathtaking and unbreakable displays of championship distance running, his latest gold medal putting him in the same company as Paavo Nurmi, Emil Zatopek, Lasse Viren, Haile Gebrselassie, Kenenisa Bekele – the only other men in history to win two Olympic 10,000m titles.

At the same time he continues to associate himself with distance running coaches of some disrepute, not just the American Alberto Salazar, who single-handedly transformed Farah from mostly also-ran to mostly invincible, but also Jama Aden, the Somalian-born, Ethiopian-based coach who was arrested by Spanish police in June for possessing an array of performance enhancing drugs.

The Aden association, however slim, was raised in the immediate aftermath of this latest victory, which involved Farah recovering from a fall, early on, to eventually run down the Kenyan Paul Tanui in the homestretch, winning in 27:05.17 – with Tanui finishing close behind in 27:05.64.

Following Aden’s arrest, British Athletics claimed that he had worked as an “unofficial facilitator” for Farah in 2015, but all he had done was “hold a stopwatch”. However, around the same time, a picture emerged of Farah sitting alongside Aden while training in Ethiopia earlier this year. Aden’s daughter also suggested via social media they are also “good friends”.

So this picture is put to Farah, not out of spite or of anger, but simply because it’s true: he didn’t appear in any way angered by it either, preferring to keep things light-hearted.

“Obviously, you know, it’s a small sport . . . and by getting pictures of someone, asking you to take a picture, you’re not going to say no, are you?

“So it doesn’t mean you train with them.”

There may never by any conclusive evidence that Farah is running clean, nor indeed otherwise, and now aged 33, this sort of mild interrogation and accusation may well follow him into retirement.

The mild accusation goes beyond Farah, however, with some sections of the British media also being questioned as to why they don’t subject him to the same scrutiny they apply to Russian athletes, especially the likes of swimmer Yulia Efimova, who was cleared just in time to compete at these Games.

Farah, however, was the headline story on the BBC news in June last summer, as allegations against Salazar began to emerge; whatever about his relationship with Aden, as long as Farah stays close to Salazar then the subject of drugs will always come up.

It was his American training partner at the Nike Oregon Project, Galen Rupp, of all people, who contributed to his fall on Saturday night, with Farah rolling on to his right shoulder, before promptly springing back up. Viren also tripped and fell in the 1972 Olympic 10,000m final, before similarly recovering to win gold for Finland – then defend that title again in 1976.

“As soon as I got up, I was hoping the guys didn’t see me fall up front. If it happened five laps to go, six laps to go, I think the race would have been over.”

It made for possibly his hardest earned gold medal so far, and helped make up for an otherwise somewhat disappointing night for Britain, as neither Jessica Ennis-Hill nor Greg Rutherford could defend their London 2012 titles, settling for heptathlon silver and long jump bronze respectively.

Farah is not done yet, however, and if he wins the 5,000m on Saturday, will be only the second man, after Viren, to win both Olympic titles twice.

Even if the subject of drugs keeps coming up.