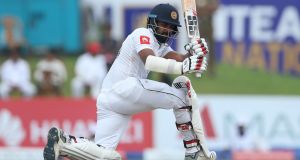 The final hour of the fourth day in Galle threw up the type of drama that makes Test cricket such a bewitching sport; one of those passages of play you wish you could stick in front of the eyeballs of its money-obsessed administrators, Clockwork Orange-style, when they talk about the format’s impending demise.

Sri Lanka had fought back admirably from their opening-day meltdown with the bat but when Jack Leach claimed his second Test five-wicket haul, eventually rolling the host for 359 all out with the removal of Angelo Mathews for 71, England found themselves needing a mere 74 runs to take a 1-0 lead in this two-match series.

Yet by the time bad light brought an end to proceedings the tourists had stumbled to 38 for three, a total which was itself a recovery after the combination of a worn pitch, a hard new ball and Sri Lanka’s two finger spinners had produced an array of spitting cobras to see England reeling on 14 for three.

This frenetic passage of play began in the first over of the run chase when Dom Sibley completed a slightly forgettable Test match – six runs and a costly dropped catch – by shouldering arms to Lasith Embuldeniya and hearing his off stump rattle behind him.

Then went Zak Crawley three overs later as a slightly tortured innings of eight from 21 balls was snuffed out by Embuldeniya, the impressive left-armer this time getting one to burst sideways off the moonscape and fly to slip off the edge.

With Joe Root then following his first-innings 228 with a crazed run out for one – Niroshan Dickwella throwing down the stumps as the England captain ended up in a heap – the sense of panic running through the away dressing room was palpable.

It needed Jonny Bairstow and debutant Dan Lawrence to restore some sense of English calm by hanging in until the close – albeit with the ball still doing plenty – on a day when Leach had grafted hard for his five for 122 from 41.5 overs and Dom Bess had followed his five on day one with a curiously more encouraging three for 100.

Around 20 minutes before tea some tired English minds had been wandering towards thoughts of a potentially tricky chase and, perhaps, some pangs of regret about the third morning’s collapse of six for 49 that left a good few runs out in the middle.

A bottom-edged cut from Mathews had just taken Sri Lanka into the lead with five wickets remaining and a near two-hour stand with Niroshan Dickwella had formed, blunting the tourists and earning applause from a now upbeat Sri Lankan balcony.

But Bess, whose increased control after lunch had seen off Dinesh Chandimal for 20, profited from a spell of indecision for the left-handed Dickwella while playing Leach out of the footmarks, returning at the behest of Root and teasing an edge behind.

With Leach then bowling Dasun Shanaka fifth ball – the all-rounder fooled by some extra flight and yorking himself – England went into the interval with Sri Lanka effectively 16 for seven. The session had seen three wickets fall for 60 runs and the frankly immaculate Stuart Broad send down five overs for one measly run.

Leach had also twirled himself into rhythm and struck again after the break, Root displaying little sign of fatigue, despite all but 30 minutes of the match spent on the field, when holding a flying catch to his left at slip off Wanindu Hasaranga.

Another Sri Lankan counterattack followed as Mathews found an ally in Dilruwan Perera, the pair chiselling out 38 precious runs in 10 overs to give rise to a possible repeat of the former’s Headingley heroics back in 2014.

But when Perera overbalanced to Leach and Buttler whipped off the bails for his first stumping in 28 Tests as a wicketkeeper, it left Mathews needing to shepherd a genuine No 11 in Asitha Fernando. Four overs later, as Mathews tried to guide a single and retain the strike, only to see it fly to slip, Leach had a well-earned fifth.

Whatever the final outcome, Root will draw much confidence from his spinners improving over the course of the fourth day; certainly after a morning in which they once again struggled to create pressure and Sri Lanka’s fightback swelled to 242 for four.

Bess removed the nightwatchman Embuldeniya first thing but both he and Leach then allowed Mathews to ease himself into his work, offering the imposing right-hander too many deliveries to rock back and cut away.

With opener Lahiru Thirimanne having turned his overnight 75 into a second Test century – the left-hander’s first in nearly eight years – the second new ball had begun to take on vital importance.

Root opted to throw it to Sam Curran and Mark Wood here, the former finally breaking through to remove Thirimanne on 111 when he got the shiny new Kookaburra to shape away, nip back in and send an inside edge into the grateful gloves of Buttler.

The presence of Ben Foakes on tour gave England a tricky decision to make about Buttler’s role before this series but after 183 overs in the field, four catches and a maiden Test stumping, he has started his winter’s work behind the stumps well. – Guardian

The story behind the amazing growth of women’s Gaelic football 10:12
Kilmacud Crokes and a 25-year boom in women’s football 10:00
Ulster’s new breed of backline boys can return silverware to Belfast 06:00
Gordon Elliott has ‘no complaints’ following one-year ban 09:13
Jockey Hugh Morgan and Young Dev return to Navan after wonder ride 06:00