England bounce back to crush India at the Gabba 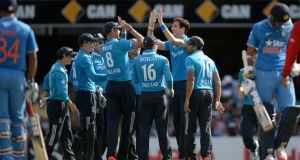 Steve Finn is congratulated by his team mates after taking a wicket during England’s comprehensive nine-wicket victory over India at The Gabba.(Photograph: Gareth Copley/Getty Images)

England took a giant stride towards the Tri-Series final with this bonus-point victory against one of the World Cup favourites at the Gabba. However, it was the strides taken by Steven Finn which could be far more significant after the 25-year-old secured his first five-wicket haul in one-day internationals.

It was here in Brisbane almost exactly a year ago that Finn was sent home by Ashley Giles after the then England limited-overs coach branded the bowler “unselectable”. Troubled by a technical and mental block that saw him lose his action during England’s torrid Ashes tour, there were real fears Finn would be lost to international cricket for good.

Just last week in Canberra, Chris Rogers, the Australia Test opener who was Finn’s captain at Middlesex last summer, warned that Finn would need more time to get back to his best. Yet a performance that saw him remove five Indian batsmen – including the key scalps of Virat Kohli and the captain, MS Dhoni – suggested Finn is closer than we think.

England will be pleased he played a key role in routing India for 153 inside 40 overs. Especially as he was likely to have been dropped for this match had Chris Jordan not been sidelined by sickness. Just as pleasing will be the way the batsman set about the run chase too, with Ian Bell and James Taylor sharing a 131-run second-wicket stand in 147 balls to ease England home to a nine-wicket win which will restore confidence after last week’s defeat by Australia in Sydney.

It is the Australians who await England once more in Hobart on Friday and the Tri-Series final is now a realistic aim for Eoin Morgan’s side, especially as the Australians will be without George Bailey, the captain banned for slow-over rate offences; David Warner, who is rested; and Mitchell Johnson, allowed to skip the trip to Tasmania for personal reasons.

Conditions at the Bellerive Oval will be perfect for James Anderson and the steadying influence of the Lancashire bowler in Brisbane was also significant as he returned from the knee injury that had kept him out of the pre-Christmas tour of Sri Lanka.

Over-by-over report: Steven Finn skittled India and Ian Bell made an unbeaten 88 as England cruised to victory in Brisbane

Anderson took his place in England’s one-day attack alongside Stuart Broad for the first time since the 2013 Champions Trophy final, also against India and his four-wicket haul was reward for a swing bowling display India just couldn’t deal with.

The 32-year-old set England on their way in the third over with the wicket of Shikhar Dhawan, the big-hitting menace at the top of India’s order edging the first delivery he faced from Anderson to the wicketkeeper, Jos Buttler. Finn then struck in the 15th over, removing Ajinkya Rahane after the opener was caught by Taylor at mid-on coming down the wicket. India’s progress was checked but the second-wicket stand guided them past 50. Kohli then came to the crease but India’s most dangerous batsman was gone within two overs, edging Finn behind attempting an audacious uppercut.

Kohli’s departure was the first of three wickets to fall in as many overs as India subsided to 67 for five, with Suresh Raina edging behind off the spin of Moeen Ali and Finn removing Ambati Rayudu via the same mode of dismissal to ensure a busy night for Buttler behind the stumps.

Dhoni, who recently quit Test cricket to concentrate on the one-day game, combined with Stuart Binny, playing only his sixth ODI, to add 70 runs to his side’s total. Yet Dhoni, dropped by Anderson on 33, became Finn’s fourth victim in the 37th over when he gloved the fast bowler behind attempting to hook.

India were missing Rohit Sharma, who scored a century against Australia in Melbourne on Sunday, with a hamstring injury, but not even the owner of the highest score in ODI cricket – Rohit hit 264 against Sri Lanka last November – could have rescued them from this situation.

India were simply brushed aside. Axar Patel was bowled by Finn on his first ball to hand as the Middlesex fast bowler took his first five-wicket haul in this format and also put him on a hat-trick. Finn did not manage that feat, after Bhuvneshwar Kumar coolly left the hat-trick ball. Anderson, though, soon sent the all-rounder on his way with a beautiful delivery which moved a touch off the pitch and rearranged Kumar’s stumps.

At 143 for eight, India were in danger of not even posting 150. They did at least manage that but only just as Anderson removed Binny for 44, caught well by Morgan, and Mohammed Shami was the last to go, this time to an even better catch from Moeen.

Such was the brevity of India’s innings, England had to bat for six overs before the scheduled innings break. They went into that on 41 for one, having lost Moeen for eight when he was caught by Kohli at mid-off attempting to hit Binny over the top.

However, when play resumed it was a procession for Bell and Taylor, who knocked off the 113 more runs needed in 21.3 overs. It was apt that these were the two batsmen who both fell for ducks to Mitchell Starc’s first over in Sydney last Friday.

This time, though, they both passed 50, Bell backing up the 187 he scored against a Prime Minister’s XI in Canberra last week with an unbeaten 88 here and Taylor reaching his third half-century shortly before victory was sealed with 22.3 overs to spare.