Don’t forget the real athletes as ‘reality athletics’ takes over 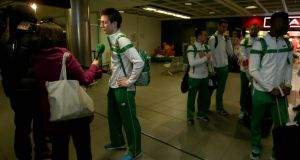 Ireland’s Mark English is interviewed on his return home from winning silver at the European indoors in Prague. Photograph: Donall Farmer/Inpho

It was shortly after turning the dial when Mark English came on Today with Sean O’Rourke. The immediate fear was this could go either way, a bit like Jeremy Clarkson asking for some late night grub, not that an old school RTÉ presenter like O’Rourke was ever a man to underestimate his listener.

“As you may know,” he started, with some generous presumption, “athlete Mark English won silver in the 800 metres at the European Indoor Championships in Prague last Sunday afternoon” - before managing to engage in a thoughtful conversation about what it takes to succeed as an elite distance runner.

No, he wasn’t surprised to hear that English trained for about four hours, every day. Or that he actually enjoys balancing it all with his medical studies at UCD. There was some confusion over the length of his afternoon nap - English tries to lie down for about half an hour, not three hours - but otherwise O’Rourke neatly pulled it off, without making English sound like some sort of two-legged freak show.

He also recognised that at 21 - and so some way off his physical peak - English still had plenty more developing to do, but that when it came to next year’s Rio Olympics, or indeed Tokyo 2020, at least we had an athlete reaching for the very top of his event, and so far anyway was going about in a thoroughly dedicated manner. English, more importantly, recognised himself that athletes will ultimately be judged on their achievement outdoors, not indoors, admitting that one of the reasons he targeted Prague in the first place was to break the “boredom” of winter training. He’s clearly not getting carried away with a silver medal from a European Indoors, nor should he.

Still English got some recognition elsewhere this week, including the RTÉ Nine O’Clock News, which these days normally reserves their homecoming pieces to storm-swept sailors or half-crazed mountaineers. It helped that it was a relatively quiet weekend for elite Irish sport, coinciding with some temporary relief from the infections strain of hype that surrounds the Six Nations.

The strange thing about all this is that in a sport that increasingly celebrates the perfectly ordinary, there is still some due respect left for an athlete like Mark English. In fact athletics must be the only sport in the world where those at the very basic entry level, who run for the mere pleasure of it, without actually achieving anything, are now deemed heroic in some sense or another, especially if they’ve lost a few stone in weight or quit smoking 40 cigarettes a day.

If anything those at the bottom end of the sport are now getting more recognition than those at the top - like some local Ardfert footballers kicking about on Banna Strand getting more media spotlight than Kieran Donaghy. This is not necessarily a bad thing, as they’re more likely to represent the very essence of sport, although athletics in this country is becoming increasingly prone to the purely standard heroics of mere participation.

But don’t just take my word for it. The cover story of this week’s RTÉ Guide - still the best-selling magazine in the country - features three “running junkies”, including David Gillick, who certainly reached the top of his event, his 44.77 seconds for 400m still an Irish record of considerable worth, and who understandably misses the routine of the elite athlete.

Also featured is Ray D’Arcy, another RTÉ radio man, who “has got the nation running”, and enjoys running about three times a week, and Nuala Carey, RTÉ’s weather and Lotto presenter, who runs three or four times a week. Both of them come across as wonderfully addicted to their running, for utterly justifiable reasons, although they’re hardly running junkies, at least not in the way Arthur Lydiard or Percy Cerutty meant running to be.

The cover story of this month’s Irish Runner - still the best-selling running magazine in the country - features something similar, an in-depth interview with singer-songwriter Niall Breslin, better known as Bressie, who for several years now has been using running as a vital tool in his struggles against anxiety and depression. Bressie clearly has a passion for running - also promoting his 1,000 Hours project, as a way of drawing others in too - and again it’s a wonderful and utterly justifiable cause. The only worry here is that not even the specialist running magazines can find much room anymore for the thoughtful conversations about what it takes to succeed as an elite distance runner.

And another example: an email received this week invited me to register for next month’s Great Ireland Run, in the Phoenix Park, for the chance to join in the race with “Tony Audenshaw from the ever popular soap Emmerdale, Jenny Dixon from the much loved Irish soap Fair City, and fitness and food guru and Irish model Roz Purcell”. Not one mention of a single elite athlete, from this or any other country, which believe it or not is what events like this were originally intended to cater for.

It’s hard to blame race organisers for feeding into this, given mass participation is their bread and butter, but as the sport increasingly celebrates the perfectly ordinary, it felt extraordinary to listen to Mark English this week, an original running junkie, not trying to dress himself up as anything more or anything less than that.