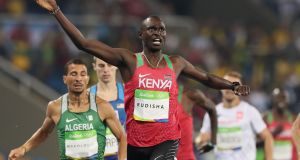 We came to witness another crack at Olympic history - although not many of us, as it turned out - and left instead after a near-action replay of the next best thing.

Because in defending his Olympic 800m title, David Rudisha may not have broken his world record, but produced a world-leading 1:42.15, not quite from gun to tape like London four years ago, although almost as impressive.

The Kenyan thus becomes the first man to win back-to-back titles in the event since Peter Snell of New Zealand, in 1960-64: the glaring empty seats didn’t add to the atmosphere, although it hardly mattered to Rudisha, the 27 year-old now the undisputed champion of the event.

There was a momentary scare when his 19 year-old compatriot Alfred Kipketer bolted to the front, opened a slight lead, and passed halfway in 49.23 seconds: it was short-lived, however, as Kipketer died the proverbial death, and ended up seventh.

Rudisha simply hit full stride and never looked back, controlling the last 200m as if it was a training session.

The race for silver and bronze was a little more exciting, Taoufik Makhloufi from Algeria coming through for silver, setting a national record of 1:42.61, while the Frenchman Pierre-Ambroise Bosse was passed by the crafty American Clayton Murphy in the last 30m, who in winning bronze in 1:42.93 became the first American medallist in the event since Johnny Gray in 1992. Bosse went for broke and ended up with exactly that.

For Rudisha, not a fan of the drizzling rain that had fallen earlier, it underlined his supremacy in the event: he now owns the three fastest performances in history, and now two Olympic title and two World titles.

The other track final on the night may well have produced one of the most exciting - and closest - finishes of the Games, as Shaunae Miller form the Bahamas somehow stayed upright long enough to reach the line ahead of the hotly fancied Allyson Felix from the USA in the women’s 400m.

Miller clocked 49.44 seconds as she fell over the line in lane six, or rather dived for the gold, and in the process just about held off Felix, who ran 49.51.

Two brilliant races, only too bad there weren’t more people in the stadium to witness them.