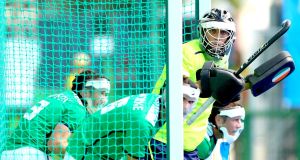 The nomination comes after the net minder led Ireland to what was, after a slow start, generally seen as a decent showing at the Rio Olympic Games, the first in more than a century.

Harte currently holds the trophy, having become the first Irish player to ever win a world hockey award last year.

The 28-year-old from Kinsale, who plays professionally at club level with Dutch club Kampong and in the Indian Hockey League with Dabang Mumbai, will face some stiff competition.

Argentina’s Juan Vivaldi, Jaap Stockmann from the Netherlands, Belgium’s Vincent Vanasch and Parattu Raveendran Sreejesh from India are all in contention.

The winners will be decided by the combined results of an on-line vote that is open to the public and a peer vote from international athletes. Voting will open on November 16th and closes on December 2nd.

Harte is the only Irish player listed in the awards that cover 10 awards in the men’s and women’s game.

It is a weekend off for the Irish Hockey League but maybe one to reflect on what many see is a growing distance between the top teams and those playing in provincial competitions. Monkstown put 10 goals in against Clontarf in the Leinster Senior Cup (Mills Cup). Three Rock Rovers stung Trinity with seven goals.

There’s little doubt hockey compared to 10 years ago has become a high scoring game but 10 goals and seven goals are a hat full. Just how to bridge the gap in a modern game in which there is increasingly less club loyalty, is becoming a vexed question.

Perhaps as some coaches have said, there is room for an all-Ireland league division two, which might tighten up the growing distance between clubs.