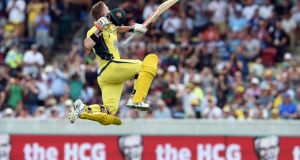 Dave Warner smashed a sixth one-day international century of the year to drive Australia to a convincing 116-run victory over New Zealand as the hosts wrapped up the series with a match to spare in Canberra on Tuesday.

New Zealand captain Kane Williamson won the toss under leaden skies in the Australian capital and made the decision to bowl on a Manuka Oval track where batting first has been an all but sure-fire path to victory.

Australia duly piled on an imposing 378 for five with the Blacks Caps only able to muster up 262 all out in 47.2 overs in reply.

Warner hit 119 off 115 balls with 14 fours and one six, combining with his captain Steve Smith, whose 164 went a long way to winning the series opener in Sydney on Sunday, in a second-wicket partnership of 145.

“It was a fantastic wicket, it always is down here at Manuka, and we know that if you keep wickets in hand you can take 100-150 runs off the last 15,” Warner said.

Warner’s two centuries were among the few highlights for Australia in their 5-0 humiliation in South Africa in October and six in one year, with the third match of the series in Melbourne to come, is unprecedented for an Australian.

Only Indians Sachin Tendulkar (nine in 1998) and Sourav Ganguly (seven in 2000) have hit more centuries in one year.

“It’s the format that I perhaps thought wasn’t my greatest but this year’s been fantastic and I’ve got to keep going as well as I can,” Warner added.

The opener secured his 10th one-day century with a scrambled single and it took a brilliant catch from Williamson to dismiss him after two-and-a-half hours at the crease, the Black Caps skipper getting down to take a full-powered shot inches above the grass.

Williamson top-scored for the visitors with 84 and put on 125 for the third wicket with Jimmy Neesham (74) but the writing was on the wall once they had departed.

The Australians, assured of retaining their number one ranking in the 50-over game, reclaimed the Chappell-Hadlee trophy which New Zealand had won on home soil in February.