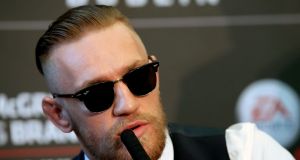 Aside from aping Flair’s tired old egomaniacal act (right down to wearing Aviator sunglasses indoors just like the superannuated grappler), a lot of McGregor’s professional career has reeked of the WWE. Photograph: Dan Sheridan/Inpho

In the three decades-old clip of Ric Flair in his outrageous pomp, the besuited wrestler has gold chains draped around his neck, bouffant hair that is near enough platinum, and boots fashioned from the skin of wild animals. Faux irate at the fact somebody has dared try to ride the coattails of his success, he launches into a tirade for the camera about how his impressively profligate lifestyle marks him out as superior to his obviously lesser opponent.

“It’s so hard for me to sit back here, looking at a guy out here, hollering my name,” shouts Flair. “Last year I spent more money on spilt liquor in bars from one side of the world to the other than you made. You are talking to the Rolex-wearing, diamond-ring wearing, kiss-stealing – Woooo!! – wheelin’ dealin’, limousine-riding, jet-flying son of a gun – and I’m having a hard time holding these alligators down . . . “

The accent is different, the syntax too, and the suit has the unfortunate flared collars of that dark time for tailors everywhere. But the tone, an almost convincing mixture of bragging and bravura, and the note-perfect delivery, oh so theatrically offended by those perceived to be beneath him, is remarkably familiar.

It is the very template, right down to the dripping bling, that has served Conor McGregor so well in the overweening, outsized character that has been such a crucial part of his shtick since he first broke into UFC. The self-styled “Nature Boy” was at this preening carry-on years before Notorious was even born, never mind had three people die making him a Rolex of his own.

“Coming from a guy who built a career copying my persona,” said Flair, reacting to news McGregor has been badmouthing WWE. “I expected the type of class we get from Ronda (Rousey) and Anderson (Silva).”

Like so much else in his career, McGregor’s recent decision to declare war on WWE and all who sail in it appears a smart and calculated business decision rather than just him riffing for reporters. There are fewer fan bases more reactionary and with thinner skin than the wrestling mob (perhaps only the UFC’s own are worse) so any criticisms of their heroes is bound to cause offence and generate headlines.

Given that this is, of course, the point of every public utterance ahead of any pay-per-view contest, the Dubliner didn’t stint on the puerile trash-talking, proving yet again that his reputation for loquaciousness is greatly exaggerated.

“For the most part, those WWE guys are pussies to be honest,” said McGregor in his original salvo. “They’re messed up pussies if you ask me . . . ”

Obviously thrilled with the massive coverage this initial foray provoked, he doubled down, offering even more eloquent attacks on the new generation of wrestlers (“absolute dweebs”) and John Cena (“a big, fat, 40-year-old failed Mr Olympia motherf***er”). A psychoanalyst might infer that in all the juvenile name-calling he does protest too much. Aside from aping Flair’s tired old egomaniacal act (right down to wearing Aviator sunglasses indoors just like the superannuated grappler), a lot of McGregor’s professional career has reeked of the WWE.

He may deride Flair and his colleagues for being part of a scripted entertainment rather than a genuine sport but his own trajectory, carefully choreographed, constantly exaggerated, and slickly marketed to gullible rubes is, like large chunks of UFC culture, cribbed straight from the WWE playbook. Wrestling Svengali Vince McMahon’s proudest boast has always been that he has the machinery in place to make a star out of just about anyone who climbs through the ropes; Dana White has proven similarly adept at manufacturing cults of personality with McGregor perhaps his finest achievement in this regard.

The irony doesn’t end there. During one of his rants about the wrestlers, McGregor mocked Brock Lesnar (who has dabbled in both the ring and octagon) for being “juiced up to his eyeballs”. While it’s always heartening to hear an athlete condemn steroid use, somebody making a living in UFC, a sport that finally, belatedly, hopefully, got serious about the menace of performance-enhancing substances just last year, is hardly in a position to be calling out others on that particular score.

McMahon and his cohorts have made vast fortunes exploiting desperate performers while peddling lowest common denominator storylines often based on ethnic stereotyping and casually racist assumptions. A man who can blithely label a Russian of German descent a “Nazi” and boast of invading favelas and killing those unfit to work would fit perfectly into the WWE’s dramatis personae. Which may explain why there was so much speculation during his “retirement” earlier this year that McGregor might make a lucrative cameo at Wrestlemania 32, just like Rousey and Floyd Mayweather in previous editions.

If nothing came of that, his apparent obsession with the WWE during the build-up to Saturday night’s rematch with Nate Diaz has renewed talk that he may yet end up being incorporated into one of the shows he claims to find so absurd yet compelling.

As more than one commentator over here has pointed out this past week, McGregor has been doing a quite flawless turn as the archetypal wrestling heel, whipping fans into the type of irritated frenzy that puts bums on seats, making the prospect of him eventually appearing at one of their events all the more alluring and money-spinning.

Not right now perhaps. But one day soon.