Damien Shaw ready to seize the opportunity on his professional debut 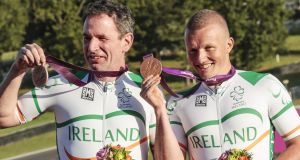 Damien Shaw (right) was pilot for James Brown at the 2012 Paralympics where they won bronze in the Individual B Pursuit. Photograph: Inpho.

National road race champion Damien Shaw has said he is ready to seize the opportunity he has been presented with by the An Post Chainreaction team, and has been working hard in recent months to be ready for his debut in professional races.

Now 32 years of age, Shaw is stepping up at a later age than many in the peloton, but he also came to the sport much later than most. He started cycling at 26 years of age. As he points out, he has been at it for far less time than many.

“I was speaking to Sean Kelly a few years ago and he said to me that it takes about seven years of being fully committed before you can really see what you can do,” he told the Irish Times on Thursday, speaking at the team’s training camp in Calpe, Spain.

“For me I am probably five years training with a purpose, so I can still improve.”

In recent years Shaw has combined racing in Ireland with his work as a fireman. Although he was part-time, he proved his worth in many races, taking numerous victories in Irish events. He has also shone when paid riders have been present; he was second, second and third on the final three stages of last year’s An Post Rás, and then won the national road race championship in June.

Those performances copper-fastened the interest of the Sean Kelly team and he was made an offer, joining six other Irish riders in the line-up for 2016.

Shaw has been training well and is encouraged by his power readings at this point in time. Ditto for how he has been comparing with his new team-mates out on the roads. “I have been going as well as any of them, and am looking forward to starting racing.”

He will make his official debut in the GP la Marseillaise on January 31st, and will then ride the Etoile de Bessèges from February 3rd to 7th.

Speaking at the camp, Kelly said he was impressed by how Shaw has approached those challenges. “I was talking to him about Bessèges and he is totally chilled, not stressed at all. For a guy to have that attitude is very important.

“He is an unbelievably talented guy. He has a lot of power. He has come a long way, how far more is the question. We don’t yet know how much is in him.”

The other Irish riders on the team this year will be Jack Wilson, Connor McConvey, David Montgomery, Daniel Stewart, Sean McKenna and Angus Fyffe.

In addition to overseas professional events, the Rás will, as ever, be a major target.