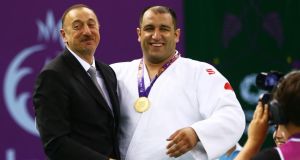 I recognise this feeling. The adrenaline crash. The crankiness and mild bloating. The last clean T-shirt plastered to my back in greasy sweat. The struggle for one last decent intro.

It used to come on once every four years, at the end of that positively heaving five-ringed travelling circus also known as the Olympics. All the hype and heightened sense of wonder, all the nervous anticipation and willingness to embrace every moment of agony and ecstasy, suddenly reduced to zero. Then just enough time in the four years in between to restore it all over again. Now, and whether entirely intentional or not, these first European Games have gone and done something similar.

From the outside looking in, they may at times have felt more like the Community Games than the actual Olympic Games. Yet for those of us in Baku, they have at times felt like a sporting event of properly Olympian proportions. But certainly not all of the time. Because while what unfolded here over the last two weeks has answered some questions about the future of these Games – mainly that the athletes want them, at least in most sports – it has left other questions unanswered. Including the question of whether or not Baku should have staged them in the first place.

Remember those costs? By spending €85 million on the opening ceremony, €540 million on a new stadium to stage it, plus that reported €9 billion on running the entire show, the government of Azerbaijan has set a suspiciously high standard as inaugural hosts.

For a city of four million inhabitants (not far off half of Azerbaijani’s entire population of about 9.4 million), that must be disappointing. Ironically, the only events to actually sell out were the opening and closing ceremonies – and they weren’t about the sport at all, only a very expensive Azerbaijani salute to themselves.

And yet at no point over the last two weeks has anyone here seen or heard a single word of dissent, about either Baku’s elaborate staging of these Games, or what exactly the final cost will be. And you don’t need to speak Azerbaijani to understand why not, when the Protect Journalists committee now ranks Azerbaijan the fifth most censored country in the world. The city is dotted with old kiosks and President Ilham Aliyev has been making the front pages of practically all the papers, typically smiling alongside their latest gold medallist.

So, the only rumbles of concern over what exactly has been fuelling these Games have been coming from the far side of Europe, particularly from some of the human rights activists barred from entering Azerbaijan for raising those concerns in the first place. Pat Hickey, president of the European Olympic Committee (EOC), believes those concerns are best dealt addressed behind closed doors, rather than in public, and that may well be the case. Yet in allowing Baku to stage these Games on such a gloriously lavish scale they may have actually set the bar too high. Unless the EOC can find another host notion with oil money to burn, the European Games of 2019 will be in for a major downgrade.

The other big question is whether or not those 2019 Games (and there’s no venue yet) can attract athletics and swimming at a properly competitive European level, unlike the downgraded events that went on here (division four league in athletics, juniors only in swimming). Without them, these Games can’t attract the broadcasters and continental sponsors they will need to grow and, as of now, neither athletics nor swimming appear committed. The success of the Irish boxers here was enough to sustain the Irish interest although, without them, would these Games have even registered in Ireland?

Not that the Azerbaijani government are likely to be worried by any of this, and whether these Games were a waste of money or effort, and not just because they’re poised to finish second on the medal table (behind Russia). Clearly, they’re looking at the bigger prize of the Olympic Games, and their only question now is whether or not they submit a bid for the 2024 Games, the closing date for which is September 15th – the winning city selected in 2017.

It possibly wasn’t entirely coincidental that both Paris and Rome this week confirmed their Olympic bids for 2024, just as these Games reached their climax.

Which means it’s now making-your-mind-up-time. On the surface they would appear to have it all, with enough oil under the surface to fund it, although just because you bring a major sporting event to the city doesn’t mean you can bring the city to it. And after two weeks in Baku, I’m still not sure if the lasting feeling will be more of a political circus than a proper sporting event.