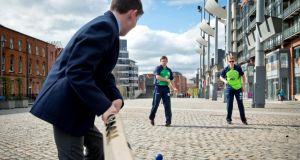 The latest phase of Cricket Ireland’s top down development of the game will see an increased focus on participation through the club game, with the stated goal of moving the sport further towards the mainstream.

The strategic plan running up to 2020 reiterates the headline goal of achieving Test status – with Ireland presently sitting pretty on top of the Intercontinental Cup qualification table with maximum points – but it reaches down through the interprovincial game to the clubs and schools in what is an ambitious document.

Then again the game’s governing body has ticked many boxes with previous plans, growing from a full-time staff of two – chief executive Warren Deutrom and former coach Phil Simmons – to 30, a fully contracted men’s international team and expected non-grant revenues of €2.3 million for 2016.

The other headline announcement came in a new team sponsor with The KPC Group – a global conglomerate with extensive and diverse business interests in both India and the United States – coming on board for three years.

So positive news all round then, with Deutrom also of the belief that the change in tack at the top of the world game is already underway after the failed attempt of the three biggest countries to have their cake and eat it too.

Back from a recent International Cricket Council meeting in Dubai, Deutrom said: “Encouragingly this appears just the start of the ICC’s period of self-reflection. We remain hopeful that the current review of the world game’s competition structures, governance and funding will encourage merit and accountability, both in the boardroom and on the playing field.

“Up to now we’ve tried to win on a fraction of the playing opportunities and funding to which full members have always been entitled , but rarely challenged on.

“We are optimistic the tide is changing but of course it’s not just about handouts, it’s also about helping ourselves to be better, demanding as much of ourselves as we do of others.”

Ireland’s playing schedule this summer already includes 11 One-Day Internationals, four of those at home to Test-playing nations, with two Twenty20 games against Hong Kong pencilled in for September. A schedule of ODIs for 2017 will be announced at the Belfast launch of the strategic plan on Wednesday.

The Ireland women’s team are also set for a busy summer under new skipper Laura Delany, with six games against Bangladesh added to the seven-game series against South Africa.

It was the club game that Deutrom paid special attention to in an impressive 15-minute address at the Lighthouse Cinema in Dublin’s Smithfield on Tuesday.

Although participation numbers have grown to close to 50,000 in Ireland, the growth at club level has been static.

Deutrom admitted that clubs were of the belief that they were being left to fend for themselves as the governing body focused on the elite level of the game, something that will now be rebalanced according to the chief executive.

Announcing a €50,000 pool to assist clubs, Deutrom said: “The Cricket Ireland plan recognises clubs as the hub of the sport and places them at the centre of focus for grass-roots development, helping them benefit from the record number of participants at school and youth level currently enjoying the game.

“We are launching a club fund to assist the clubs with grants for equipment and facilities in addition to the practical support we provide already.”

On a day when the spotlight returned to the grassroots, there was a very appropriate congratulations paid to Jim Bennett of The Hills Cricket Club in Skerries after he received a Lifetime Service Award from the ICC for his contribution to youth development in the country.