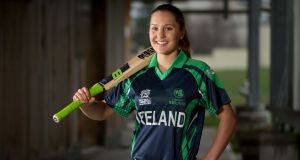 Elena Tice: the 17-year-old from Loreto, a cricket international at 13, has been included in Ireland’s hockey squad. Photograph: Morgan Treacy/Inpho

When a player called up to the Irish senior panel has a 1997 date of birth, time is moving a little too fast.

But having made her cricket debut for Ireland when she was just 13, making her the second youngest player ever (male or female) to play in an official one day international, Elena Tice probably feels like a veteran at 17.

The St Gerard’s, Bray schoolgirl, who plays her club hockey with Loreto, has been included in Graham Shaw’s squad for a three-match series against Scotland in Glasgow next month, Ulster Elks’ Gemma Frazer the second new name to be selected.

On the club front, Ulster Elks begin the defence of the Irish Senior Cup they won last season with a tricky trip to Old Alexandra, while the team they beat, Hermes, host Connacht champions Greenfields in Dublin.

There are three all-Ulster ties in the round, with Pembroke Wanderers v Loreto and Railway Union v Glenanne all-Leinster affairs.