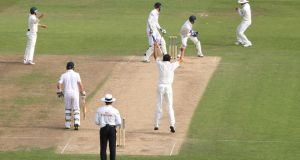 Australia captain Michael Clarke catches Stuart Broad at slip off the bowling of Ashton Agar, a decision that was not given by umpire Aleem Dar. Photograph: Nick Potts/PA

A formidable innings from Ian Bell and a moment of dubious sportsmanship from Stuart Broad left England in control on day three of the first Ashes Test at Trent Bridge.

Bell was destined to dominate the headlines thanks to a measured 95 not out, his top score against Australia in a home Test and one that pushed England on to 326 for six – a lead of 261.

But Broad’s decision not to walk when he got a thick edge and was caught by Michael Clarke at slip late in the evening session, with England 232 in front, was a major flashpoint.

Australia had already used both of their reviews when umpire Aleem Dar inexplicably ruled Broad was not out, possibly deceived by a ricochet off wicketkeeper Brad Haddin’s pads on the way to Clarke.

It left the tourists visibly seething and is sure to infect the remainder of the series.

Amid the controversy it was easy to overlook the all-important state of the match, though England must now go in to day four as clear favourites.

The morning session had continued in the same see-saw fashion as the first two days of the match, with England’s overnight batsmen Alastair Cook and Kevin Pietersen both making half-centuries before falling in quick succession without going on to a major score.

Instead that job fell to Bell, a man whose top score in eight previous home knocks against Australia was 72.

He occupied the crease for 228 balls, scoring 12 boundaries and sharing in meaningful partnerships with Jonny Bairstow, Matt Prior and then Broad. The last of those was the weightiest, totalling 108 in 40 overs.

The discussion over the Broad issue comes less than 24 hours after England contacted the International Cricket Council for clarification over the use of DRS in Jonathan Trott’s dismissal.

Trott was given out by third umpire Marais Erasmus – over-ruling Dar’s seemingly correct not out verdict – despite the absence of a critical Hot Spot replay.

1 Rory McIlroy admits Portrush nightmare was catalyst for his return to the top
2 Garry Ringrose to stay with Leinster as he signs two-year central contract
3 ‘For 25 minutes I ran out of oxygen’: Pepe Reina on his coronavirus battle
4 Karen Robinson Walton: I am looking at him. I say ‘Benjamin, what have we done?’
Real news has value SUBSCRIBE