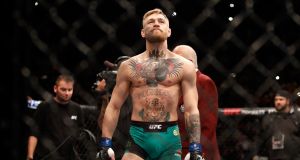 Conor McGregor prior to his featherweight title fight against Jose Aldo during UFC 194 in Las Vegas. Photograph: Steve Marcus/Getty Images

It’s always fun to watch worlds colliding. When GAA President Aogán Ó Fearghail was put on the spot over the weekend out in Texas as to whether or not Croke Park would be made available to host a Conor McGregor fight, he invoked just the most delightful image.

Consider all the flies on all the walls and you could sell plenty of space for a view of McGregor and Ó Fearghail across a table from each other. Cavan and Crumlin, two nations separated by a common language. But can it happen?

McGregor himself says he’d take it if he was offered it. “Damn right I would,” he said on Saturday night. Dana White, the man with the final say in all things UFC, confirmed only a couple of months ago that assuming McGregor beat José Aldo, his first defence would be in Croke Park. So on the face of it, the stars are aligning.

But when all fine words and dreamy intentions are put to one side, there are a few awkward questions with no ready answers to be gone through before UFC Croker can happen. The first is, “When?” Not as in, “What month?” More as in, “What time of day?”

When Ronda Rousey lost her title to Holly Holm in Melbourne last month, the gates of the Etihad Stadium opened at nine o’clock in the morning. The main card started at 11am and it was just coming up on lunchtime when Rousey walked into the ring.

For White to accede to bringing his (then) most highest-profile star out of America, certain conditions were non-negotiable. The most important of them was that Rousey’s fight would go out live on a Saturday night at 10.00pm east-coast time in the US. The move paid off in spades – Rousey v Holm was the second highest selling UFC pay-per-view event in history. With 56,214 through the gates, it was also the best attended UFC event ever.

Repeating the trick with McGregor in Croke Park is impossible, for the very simple reason that 10.00pm east-coast USA is 3.00am in Ballybough. Good luck with that. White knows this, which is why even in the same breath as he was granting McGregor his wish, he raised doubts as to whether it could happen.

“They have a curfew at night where you can’t get permits to stay out that late and do an event there,” he said. “You lose about 25 to 30 percent on pay-per-view being in another country. The amount of money for production for Croke Park, being outside – I can guarantee you it’s going to rain. I’m not a meteorologist, but I’ll bet you it’s going to rain.”

So actually, when you break it down, it starts to maybe look like not such a sure thing. If you lose 25 to 20 per cent automatically by taking it out of the US, it’s not unreasonable to imagine another chunk of the audience being gouged out by it being put on in mid-afternoon on a Saturday. The core UFC fans will still buy it in but White didn’t grow his business from one worth $2 million in 2001 to one worth $3.5 billion (€3.2 billion) today by appealing to the core fans.

McGregor is the greatest opportunity White has come across to grow his sport. He is white, he is mouthy and he needs only one punch to finish off champions who have gone a decade unbeaten. Moving his next fight to a far-off country and putting it on at a strange time of day just isn’t an obvious next step.

Especially since the relationship between the UFC and Las Vegas has become so tight and mutually beneficial. A McGregor fight has been shown to be worth $200 million (€183 million) to the Vegas economy.

For all that Ó Fearghail might paint a nice picture, the reality is that the next move is Dana White’s. And Dana White likes Vegas. And Vegas likes Dana White.

UFC 200 is down for the MGM Grand’s new 20,000- seater arena next July and the smart money is on that being the next time we see McGregor. Croke Park looks like a nice idea but, in reality, a fanciful one.