Brazil unfurled a vast canvas celebrating its rainforest and the creative energy of its wildly diverse population in welcoming the world on Friday (August 5) to the Olympic Games in Rio de Janeiro. Video: Reuters 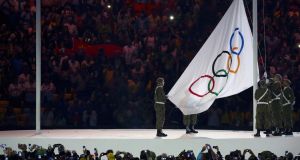 The Olympic flag is raised during the opening ceremony in Rio last night. Photograph: Ruben Sprich/Reuters

Rio de Janeiro got South America’s first ever Olympic Games off to a happy start last night with an opening ceremony that was as colourful and efficient as the long build-up was dour and in places unsatisfactory.

Organisers must now hope that the next two weeks go off as well as last night’s party in the Maracana football stadium and that it finally injects some enthusiasm into a host city that gives the impression that it is too preoccupied with economic and political woes to concentrate on a sports festival.

The four hour ceremony started bang on time and ran smoothly through to the spectacular lighting of the Olympic flame just before midnight on a balmy night in the middle of what is actually the southern hemisphere’s winter. But the logistics ahead are somewhat more daunting than throwing a loud and colourful party in the capital of carnival.

Brazil’s punishing recession and the constraints of the Maracana meant this show was lighter on wow factor than those in Beijing and London.

A football stadium with no running track around it meant City of God film director Fernando Meirelles had less space to work with than his Olympic predecessors and the height restrictions of pitch-side access points did give him a chance to work with the huge glitzy floats used at the nearby sambódromo for carnival.

Instead his production team leaned heavily on a son et lumière show that mixed in plenty of local music from the bossa nova of Rio’s 1950s heyday to the heavy base of funk carioca that is the soundtrack today of the city’s favelas with several stops at points in-between.

Joining some of Brazil’s best known musical stars were actors Judi Dench with Central Station star Fernanda Montenegro who read a poem together, as well as supermodel Gisele Bündchen making what we were told would be her last parade down a catwalk that stretched the length of the stadium floor accompanied by the local classic The Girl from Ipanema. 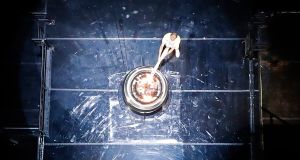 As is the way of these events, the production team sought to tell us a story, this one centred around sustainability and a rather sanitised version of Brazil’s history. But then, the opening ceremony of a sporting event was never likely to be the venue for Brazil to confront its legacy of slavery which over a century later still leaves it scarred with gaping social inequalities that visiting athletes and journalists have been able to view from the windows of the special fleet of buses zipping them around the city.

The highlight of the history lesson was the recreation of the flight of the 14-bis, the plane of aviator Santos Dumont, who as every Brazilian knows was the true pioneer of powered flight rather than the Wright brothers.

But given a raging political crisis it was perhaps a wise call of organisers to forego on the night the more macho patriotism that was on display during the World Cup held here two years ago. At the start of proceedings Brazil’s flag was raised to a simple but moving samba version of the national anthem by Paulinho da Viola.

Yet turbulent politics were not entirely absent. Interim president Michel Temer was loudly booed by the locals when he officially declared the Games open in a speech that lasted just seconds and which the director decided against showing on the stadium’s big screens in a vain bid to curtail the anger.

Earlier in the day several thousand protesters denouncing Temer as a coup monger for his role in the impeachment of suspended president Dilma Rousseff closed the beachfront avenue in Copacabana, forcing a late rerouting of the torch relay on the final stage of its three month journey.

Before the speeches, the athletes had arrived in a procession that seemed to last forever. They were led in by Greece and the loudest cheer bar that reserved for the hosts was given to the team composed by a group of refugees.

Ireland’s flag was carried in by Paddy Barnes, a two-time bronze medal winner competing in his third Olympics and one of our top medal hopes here who was enthusiastically clapped into the ground by a beaming Olympic Council of Ireland president Patrick Hickey, who has said this would be his last games in the job.

Absent from the delegation was Michael O’Reilly whose failed drugs test has overshadowed the Irish build-up. But if the cheers that greeted the arrival of the scandal-depleted Russian delegation are anything to go by apathy about doping might be setting in among the Olympic public.

International Olympic Committee president Thomas Bach ignored the fears that doping will undermine the credibility of his showpiece event and instead praised Rio’s preparations in his speech. “You have transformed the city into a modern metropolis and made it even more beautiful,” he claimed, a statement that the enduring grim realities of life for so many of Rio’s residents contradict.

As proceedings approached their climax the suspense centred around who would be given the honour of lighting the Olympic cauldron. And another Irish Olympic scandal had an admittedly indirect hand in that decision as well.

On Tuesday former footballer Pelé claimed he had got the nod. But he said he would have to consult with his sponsors first before deciding whether to accept the invitation only to then claim hours before the ceremony that health problems forced him to decline.

After much speculation in the Brazilian media the country’s former marathon runner Vanderlei Cordeiro de Lima was handed the honour. He had led the marathon in Athens in 2004 when he was assaulted by former Irish priest Cornelius Horan. He lost his concentration and rhythm and a chance at gold, only managing to finish in third.

Brazil’s Olympic committee had demanded Vanderlei also be awarded a gold but had to make do instead with a medal named in honour of the modern Olympic movement’s founder Pierre de Coubertin. Whether compensation or not for that Irish run interference 12 years ago Vanderlei now has another altogether happier Olympic memory to look back on.