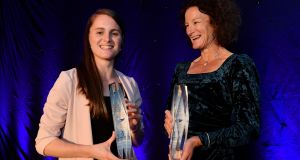 They graced the stage in relatively quick succession, first Sonia O’Sullivan, then Ciara Mageean, and the sequence and significance certainly wasn’t lost.

Nothing counts more than medals and records in this sport, and no Irish athlete reached out and grabbed more of them in 2019 than Mageean, which fittingly earned her the outright Athlete of the Year at the Irish Life/Athletics Ireland awards, and also the Track and Field Athlete of the Year, presented in Dublin on Thursday afternoon alongside an array of other worthy recipients.

Fitting too that Mageean was preceded on to the stage by O’Sullivan, who on her 50th birthday was inducted into the Athletics Ireland Hall of Fame: no Irish athlete ever has or likely ever will win more medals or set more records than O’Sullivan, although Mageean is closing in a few.

For most of her career, those medals and records have been (whisper it) compared to O’Sullivan’s, an unfair burden perhaps only something Mageean smiled jovially about after collecting her set of awards.

“It does come along, but it’s such an honour to be compared to such an athlete,” she said. “And I realise whenever people coin that phrase they mean it terms of endearment towards Sonia, and then that turns to me, and it’s such a huge privilege, because I was getting emotional up there just talking about Sonia, because I don’t think Irish people realise how lucky we are to have an athlete of that calibre, to be from our nation, in our realm.

“So to me to follow in her footsteps, maybe step in a few of them, is such an honour. Sonia trailed the path, and a blazing path it was, and if I can come closer to replicating some of the things she did I’ll be extremely honoured. And of course I’d love to get an Irish record, but I never see Sonia’s past performances as a burden, for me they’re definitely that little glowing star that I find motivating.”

After winning a bronze medal over 1,500m at the European Indoors in Glasgow in March, and setting two Irish indoor records, Mageean produced a series of excellent runs outdoors, culminating at the World Championships in Doha, becoming only the second ever women’s finalist from Ireland, after O’Sullivan in 1987, her 10th place finish in 4:00.15 just a lick away from the magical four-minute barrier, and also O’Sullivan’s Irish record of 3:58.85 set 25 years ago.

The 27-year-old from Portaferry is not done yet for 2019, and on Sunday week will be part of the senior women’s team at the European Cross Country Championships in Lisbon. “It’s always a tough one for me, 8km is a big step up in distance, but I enjoy the challenge. I’ve just come off the biggest week of mileage in my life, over 80 miles, and after Christmas it’s to altitude training, and all the focus turns to Tokyo.”

O’Sullivan’s induction into the Hall of Fame was unquestionable: during a career which spanned three decades, she won 16 major championship medals, including three European gold medals, two silver, one World Championship gold, one silver, two World Cross Country gold, and the Olympic silver medal won over 5,000m in Sydney in 2000. She also became the fourth Olympian and graduate of Villanova University to be inducted into the Athletics Ireland Hall of Fame, after Ronnie Delany, Eamonn Coghlan and the late Frank Murphy.

Asked about her career highlight, O’Sullivan paused, before a slightly surprising answer: “They’re all special in their own way, and I’ve been lucky enough to win an Olympic medal, which has to stand out as the greatest performance, but for me, and closest to my heart, was winning the World Cross Country, in 1998. That’s where it all began for me, and my career nearly ended after 1996, things got pretty low, and I spent a lot of time by myself, so to be able to come back from that, believe in myself again, and be able to get what I really wanted to get from that race.”

Among the other award winners were Kate O’Connor, named Under-20 Athlete of year after winning silver in the heptathlon at the European Athletics U-20 Championships, with the Endurance Athlete of the Year award going to Brendan Boyce after his sixth-place finish in the 50km walk in Doha.

U-20 Athlete of the Year: Kate O’Connor (St Gerard’s Dundalk)

U-23 Athlete of the Year: Eilish Flanagan (Carmen Runners)

Official of the Year: Bernie Dunne

University Athlete of the Year: Marcus Lawler (IT Carlow/SLOT)

1 Matt Williams: Six Nations must recognise the desire for revolution outside Europe
2 Aidan O’Brien targets historic eighth Epsom Derby win with strong hand
3 Monica Seles: The warrior queen who could have been the best ever
4 Séamus Power rockets into share of clubhouse lead in Detroit
5 Sport crosses its fingers yet again as ministerial merry-go-round gets another spin
Real news has value SUBSCRIBE