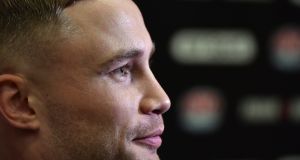 Carl Frampton will face Mexico’s Horacio Garcia in Belfast next month in his first bout since splitting with manager and mentor Barry McGuigan.

Frampton linked up with promoter Frank Warren last month and was already primed to fight at the SSE Arena in his home city on November 18th, but his opponent was confirmed on Wednesday.

Garcia has won 33 of his 37 professional outings and will take on Frampton across 10 rounds at the featherweight limit, with the Northern Irishman hoping a successful display will be a springboard to bigger fights.

He said: “This is a fight that really excites me. Garcia will definitely come and have a go. He’s a typical Mexican warrior, he’s tough and he’s game and he’ll try and put it on me in front of my home crowd.

“He has never been stopped in his career. It will be good to get a fight in against a live opponent before I get one of the big boys in the new year.

“This fight has been a long time coming and it’s good to be back out in Belfast.”

It has been a forgettable past few months for former two-weight world champion Frampton, whose unbeaten record in the paid ranks was ended when he was defeated by Leo Santa Cruz in their rematch in January.

A homecoming against Andres Gutierrez in July was cancelled at the 11th hour after the Mexican sustained injuries when he slipped in the shower.

Frampton, who then parted ways with McGuigan the following month, believes it is a sensible decision to fight 10, instead of 12, rounds.

He added: “I asked for a 10-round fight. I would have been happy to be doing 12 rounds but speaking to my team after the bad year I’ve had and the long lay-off they thought it was only fair to come back with a 10-rounder before we target the big names.”