Broncos beat Steelers to set up Manning and Brady showdown 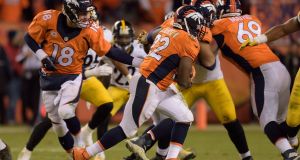 The Denver Broncos overcame an unspectacular outing by Peyton Manning on Sunday to earn a gritty 23-16 win over the Pittsburgh Steelers and set up a marquee quarterback matchup in next week’s AFC title game.

The 39-year-old Manning, back in the starting lineup for the first time since a disastrous outing in mid-November, was shaky at times but leaned on his team’s defence and running game to put Denver one win away from a Super Bowl berth.

“Our defense is guiding us, let’s make that clear,” Manning told reporters after completing 21-of-37 passes for 222 yards with no scores or interceptions.

“Down in the fourth quarter, (we got a) great play by our defence. They answered the challenge.”

The Broncos trailed the Steelers 13-12 in the fourth when defensive back Bradley Roby forced a fumble from Pittsburgh running back Fitzgerald Toussaint.

Denver recovered the ball and drove 65 yards, going ahead on C.J. Anderson’s one-yard touchdown with three minutes remaining. The Broncos added a two-point conversion and another field goal to go ahead 23-13.

Pittsburgh responded with a field goal in the final minute to pull within seven points but they were unable to gain possession of the ensuing onside kick.

The top-seeded Broncos, who earned a bye through last week’s wild-card round, will face the New England Patriots next week in what will be the fifth playoff encounter, and 17th all-time, between Manning and fellow quarterback Tom Brady.

Cam Newton and the top-seeded Carolina Panthers repelled a spirited second-half surge by their nemesis team, the Seattle Seahawks, for a 31-24 victory on Sunday to reach their first NFC championship since the 2005 season.

Carolina appeared to have the game sewn up after they came out firing with two touchdowns a little over three minutes into the contest en route to a commanding 31-0 halftime lead.

But Seattle, the two-time defending NFC champions who beat Carolina at this stage last year, got to within seven points with about a minute to play after Steven Hauschka followed three Russell Wilson touchdown passes with a field goal.

The ensuing onside kick attempt by Seattle was recovered by Carolina and the Panthers were then able to run out the clock.

“Man, it was really excruciating to watch,” Newton said about the final minutes of the game. “It was a tale of two halves and we’ve got to be better than that.”

With the win, Carolina will host the second seed Arizona Cardinals next Sunday to determine which team represents the National Football Conference at the February 7th Super Bowl.