Britton out of World Championships 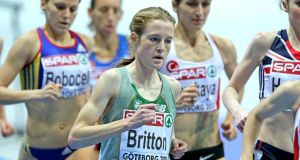 Fionnuala Britton will not take part in the World Athletics Championships next month as she continues to recover from a chest infection. The Wickow athlete will take an “extended break” from running and miss the championships in Moscow in order to focus on another successful defence of her European cross-country title later in the year.

“We are withdrawing Fionnuala from competitive competition for the rest of the track season,” Athletics Ireland national endurance coach Chris Jones explained today. “Fionnuala has taken longer than anticipated to get over the recent chest infection which ruled her out of the European team track and field championships.

“We are not willing to take any unnecessary risks and we have worked closely with the medical team with a view of having Fionnuala back to full health for the cross country season. Fionnuala has returned to running this week and we will continue to monitor her as she returns to full fitness.”

Britton, who missed last month’s Team Championships at Morton Stadium in Dublin, will defend the European cross-country title in Belgrade in December. She has previously taken gold in the event in 2011 and 2012.

Meanwhile, reigning world and Olympic 800 metres champion David Rudisha has also pulled out of next month’s championships because of a knee injury.

“I regret I will not be able to defend my 800m title at the World Championships,” Rudisha said today.

“My knee problem is progressing well but unfortunately not fast enough to enable me recover in time.”