It’s the team game that ultimately means pooling your resources 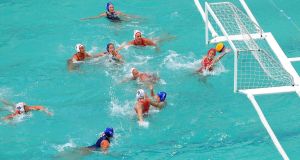 There are similarities between the sports in that you try to throw a ball into a net and you try to elevate your posture in order to add power. According to one source, an antecedent to the game of water polo was a game of ‘water handball’ that took place in Bournemouth on July 13th, 1876.

It’s more like ‘water rugby’ given the physicality, but where did it originate?

The suggestion is that the organised version of water polo started in Scotland under the direction of William Wilson, 19th-century British journalist, swimming instructor, coach and author of The Swimming Instructor, one of the first books on swimming to define modern concepts of stroke efficiency, training and racing turns. In 1877 he drew up a set of rules for a game described as aquatic football that took place between the banks of the River Dee in Aberdeen.

Do the players use some kitchen equipment?

You’re referring to a skill in the game called the eggbeater kick, a special form of treading water. Unlike freestyle swimmers, water polo players swim with their heads out of the water and when retreating towards their own goal, use the backstroke as that they can keep track of their opponents’ movements.

How many players are there on a team and why do players resemble kids in a classroom with a hand in the air?

There are six outfield players and a goalkeeper. These positions usually consist of a centre forward, a centre back, the two wing players and the two drivers. All players, with the exception of the goalkeeper, are only allowed to touch the ball with one hand at a time, and that includes catching, passing and shooting.

Is this another sport where goalkeepers get preferential treatment?

Yep. The goalkeeper is given several privileges above those granted to the other players, but only if he or she is within the five-metre area in front of his or her goal. They also are permitted to punch the ball with a clenched fist, to touch the ball with two hands and to touch the bottom of the pool.

What’s with the headgear?

Players are distinguished by the number printed on the caps, while teams are distinguished by the colour. Players from the visiting team will wear white caps, whereas the home team players will wear blue caps. However, countries can wear national colours. The goalkeepers wear quartered red caps, bearing the number 1, while substitute goalies have caps which are numbered 13.